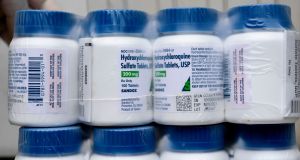 Anti-malarial drug hydroxychloroquine is one of the products to be given to some Irish patients despite poor performance in smaller trials. File photograph: Yuri Cortez/AFP via Getty Images

Hundreds of Irish patients are set to to take part in clinical trials on potential new treatments for Covid-19.

They will be part of a series of “international, multi-centre” studies, including investigation of leading “drug candidates” highlighted by the World Health Organisation (WHO) and designated for investigation.

Known as the WHO solidarity trial, it includes “anti-virals” that are known to have beneficial effects but need to be subjected to larger randomised trials in humans.

They include the anti-malarial drug hydroxychloroquine and remdesivir – developed as a potential drug to tackle Ebola – in spite of their poor performance in recent smaller trials, but Irish medical researchers confirmed they need to be subjected to these larger trials.

The trial intends to assess rapidly, in thousands of Covid-19 infected people, the potential efficacy of existing anti-viral and anti-inflammatory agents including drug combinations involving lopinavir, ritonavir and interferon beta.

It is designed to give answers to major questions, including whether these drugs will reduce mortality, reduce severity of illness and enable seriously-ill patients to recover, said Arthur Jackson, a consultant in infectious diseases at Cork University Hospital.

In addition, it would help determine the duration of time that a person was infectious, said Dr Jackson who is helping to roll out the trial, which will involve all major acute hospitals in Ireland.

He expected the Irish part to be approved by a regulator shortly and patients to be quickly signed up after that. Who will be signed up will be determined by how the pandemic pans out. It will focus on Covid-19 cases where “supplemental oxygen” has to be administered – ie people who are seriously ill with the virus.

While there was a small number of cases in Cork recently, he believed the throughput of patients would be sufficient, especially because “we are going to get further waves as restrictions are lifted”.

The result on remdesivir, while disappointing, “doesn’t change anything. You can’t base all decisions on small studies”. The same applied to hydroxychloroquine, “which was probably subject to inappropriate enthusiasm in the beginning”.

Larger, well-designed and robust studies would enable groups that would benefit or those likely to be harmed to be identified, as well as “nuances of treatment” in determining overall efficacy, Dr Jackson explained.

Unfortunately, because of the nature of coronavirus, also known as Covid-19, there were “rushed publications that you cannot draw too many conclusions from”, Dr Jackson said.

In another trial, Prof Alistair Nichol of St Vincent’s University Hospital and chair of critical care medicine in UCD confirmed Irish patients would be given antibody-rich blood plasma recovered from people who were infected by the virus and are now in good health.

Known as “convalescent plasma”, it will be used in trials in Ireland (in collaboration with the Irish Blood Transfusion Service); the UK, Australia, New Zealand and Canada.

It is part of the Remap-Cap trial, which is seeking to target community-acquired pneumonia associated with coronavirus and test a variety of treatment options simultaneously, he explained.

This was possible in countries with well-developed blood transfusion services. In the UK it was generating 1,000 units a day, with coronavirus patients due to be given the product within the next fortnight. The State was generating the exact same product, and was due to administer it to patients in four weeks’ time.

As convalescent plasma was proven with other illnesses, Prof Nichol hoped it would be “a widespread intervention” in Covid-19 cases.

He confirmed Irish medical researchers were involved in a range of trials including some focused on high-risk areas, such as those working in healthcare – and punching above their weight in the international context.

When details leaked earlier this month of a clinical trial of remdesivir from Gilead Sciences, showing what appear to be promising results in treating Covid-19, it sparked a rally in US stocks. The University of Chicago’s trial found most of its patients had “rapid recoveries in fever and respiratory symptoms” but a trial in China was later found to be less successful. Both trials involved small numbers.