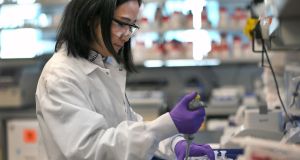 Scientist Xinhua Yan works in the Moderrna lab. The company reported antibodies in all patients and no safety issues in an early clinical trial. Photograph: David L. Ryan/The Boston Globe via Getty Images

Moderna’s potential Covid-19 vaccine produced immune responses in patients in the early stage trial, according to results published in a peer-reviewed journal for the first time.

The US biotech company’s vaccine candidate produced antibodies in all 45 participants in the first cohort of the phase one trial run by the National Institutes of Health, while the paper said there were no safety problems that could curtail further trials.

In the New England Journal of Medicine, the authors from academic medical centres in Seattle and Atlanta said the findings support further development of the vaccine. These preliminary results support the initial data that Moderna released in May from the first eight patients.

“We look forward to beginning our Phase III study of mRNA-1273 this month to demonstrate our vaccine’s ability to significantly reduce the risk of Covid-19 disease,” he said.

Moderna was the first US company to test its potential vaccine in humans, sending vials to the National Institutes of Health just 42 days after it received the genome of Covid-19. It has received $483 million in funding from the US Biomedical Advanced Research and Development Agency to speed up development of the vaccine.

The biotech group uses a new technique, based on messenger ribonucleic acid (mRNA), that transcribes some of the virus’s genetic code into human cells to teach the immune system to detect the invader.

Other companies including Pfizer and its German partner BioNTech are also using this method, but a vaccine based on mRNA has yet to be approved in the US.

The trial showed that 15 days after the first dose, all participants had produced antibodies. After 57 days, the participants had on average more antibodies than a group of 38 recovered patients, whose symptoms were mainly mild or moderate.

There are large variations in the levels of antibodies seen in recovered patients and, as yet, no standard for which to compare a vaccine.

There was also evidence of some response from T-cells, another important part of the immune system.

More than half of the participants experienced side effects including fatigue, chills, headaches and muscle pains. The adverse effects became worse after the second injection. More than 20 per cent of those taking the highest dose reported one or more severe adverse effects but the coming trial intends to use a significantly lower dose.

Andrew Freedman, a reader in infectious diseases at the University of Cardiff, read the abstract before it was released and said a full report would be needed before “firm conclusions” could be reached. But he added the adverse events were quite common after other vaccinations.

“It does suggest that this novel vaccine, using messenger RNA rather than protein, is able to stimulate antibody production in a dose-dependent fashion,” he said in a statement. “Importantly, the antibodies generated were able to neutralise the virus in laboratory assays.”

Shares in Moderna rose almost 14 per cent to about $85 each in after-market trading on Tuesday, nearing the record $87 reached when it disclosed initial results in a May press release. – Copyright The Financial Times Limited 2020