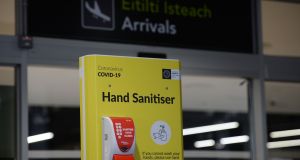 Minister for Transport Eamon Ryan has said that the Government will look at targeted Covid-19 testing at airports.

The Minister acknowledged that temperature tests do not always catch the virus, but he felt that mandatory quarantine would not be feasible.

Speaking on RTÉ radio’s Today with Sarah McInerney show, the Green Party leader said that the current system of self-isolation was working and it had managed to flatten the curve

Mr Ryan said it would not be practical to impose mandatory quarantine regulations. While such restrictions had worked in New Zealand, they would not work here as Ireland shares a land border with another country.

“We’re saying if you come into the country, you have to self isolate.”

The Minister pointed out that the mechanism for tracking people in self isolation is going to change from a paper-based system to an electronic system using email and texts to keep in touch with people who have arrived in the country.

However, he said it was better to stay home and most people were abiding by this request. That response from the public was, he said, what was going to win the battle against the virus, rather than policing. “We have to work together.”

The priority should be on trying to restore the Irish tourism industry and to protect jobs, he said.

When asked about compensation for people who had to cancel their holidays, Mr Ryan said that if the trip was booked through a travel agent there was a guarantee of compensation if the holiday was cancelled.

When asked about his opinion of Cabinet colleague, Minister for Agriculture Barry Cowen, Mr Ryan said he wanted to give Mr Cowen the courtesy of reply which he would do through his statement to the Dáil on Tuesday evening.

It was revealed earlier this week that Mr Cowen served a three-month disqualification from driving after he was found to be driving under the influence of alcohol in September 2016.

Mr Ryan acknowledged that while every one made mistakes, they could sometimes damage one’s opinion of the person.

On the issue of leadership of the Green Party, Mr Ryan said he had the experience to lead the party for the next five years, but if he was not chosen as the next leader he would focus on his ministerial office and would serve under Catherine Martin in any capacity.