Q&A: What you need to know about the South African Covid-19 variant

Three cases of the variant have been recorded in the State. Should we be concerned? 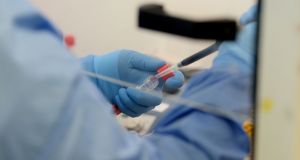 What is this new South African Covid-19 variant?

As viruses make copies of themselves to spread, they mutate, making tiny genetic changes along the way. There have already been thousands of variants of the coronavirus that causes Covid-19 since the outbreak of the pandemic, but a small number of them are giving scientists and public health authorities cause for concern.

One of these is the so-called South African variant – also known as the 501Y.V2 strain. It emerged in August in South Africa’s Eastern Cape region, before spreading to other provinces as infections accelerated.

Why are people worried about it?

One concern is that this new variant could be more contagious, much like the so-called UK variant which has spread quickly in Ireland. Another concern is that the mutations could affect the way the virus responds to the existing vaccines that are being administered to control the pandemic.

The South African variant includes changes to the coronavirus spike protein, which is what the virus uses to get into human cells. This is also what Covid-19 vaccines are designed around.

Prof Tulio de Oliveira, who is leading South Africa’s scientific effort to understand the new strain, said earlier this week that a vaccine “could be a little less effective” against it. However, he stressed a “strong belief” that some of the vaccines will be “very effective”.

What do the vaccine manufacturers say?

Pfizer and BioNTech, who are behind one of the leading existing vaccines, carried out a study – which has yet to be peer-reviewed – with researchers from the University of Texas on whether the Pfizer/BioNTech jab works on a number of identified mutations. Pfizer said it found none of the mutations had any significant impact on its vaccine. However, it hasn’t tested all the mutations, including a key one identified as E484K in the South African variant. It is planning more tests. Some vaccines, like the Pfizer and BioNTech one, can be tweaked to address new mutations.

How widespread is it in Ireland ?

Are any measures being taken to stop more cases of the variant arriving in Ireland?

Dr de Gascun, a member of Nphet, urged anyone with “travel exposure” to South Africa in the last 28 days to “come forward and make themselves known”. Nphet has also appealed for healthcare workers who have travelled from South Africa to self-isolate for 14 days. From Saturday, people arriving into the State from South Africa must provide a negative pre-departure PCR test taken within 72 hours of arrival, under new Government rules announced this week.