Challenge not just about roll out but convincing people of merits 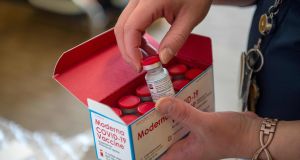 In his mammoth medical history of humanity, The Greatest Benefit to Mankind, published in 1997, Roy Porter noted of the influenza pandemic of 1918-19 that it represented “the greatest single demographic shock mankind has ever experienced, the most deadly pestilence since the Black Death . . . Nothing since has struck on such a scale. Is that luck? Or a mark of the effectiveness of the better nutrition, public health measures, vaccines, chemotherapy, and antibiotics since developed? It is hard to be sure.”

Certainly, there was confidence after 1919 that the risk of further global pandemics had reduced, but caveats always remained and making bold or arrogant predictions was unwise given the capacity of new viruses to shake medical self-confidence, as revealed, for example, by the initial medical powerlessness to deal with AIDS.

Porter finished his history by soberly observing that “other deadly viral diseases loom” with the potential for pathogens being introduced to the food chain and other related consequences of relentless economic growth and destructive development.

In some ways, we do not change that much.

The response to the 1918-19 pandemic included closures, fear, reliance on home care, resentment at officialdom, debates about the merits of different health measures and self-medication.

In Cork, historian Caitríona Foley notes, “whiskey proved, if not an effective, at least a popular and palatable medicine” while a junior doctor in the Mater Hospital during the outbreak observed that whiskey or brandy in “heroic doses” had been a popular option among the “older men”.

At that stage, under British rule, the central health authority was the Local Government Board, and its lack of a coherent response was widely criticised; well-known doctor Kathleen Lynn, for example, despaired of the Board and its tardiness and much was left to civil society in the form of relief committees.

What did change over the decades were advances in developing vaccines and it is indisputable they made a profound difference; what Porter labelled the “20th century transformation” included effective vaccines against smallpox, measles, typhoid fever, diphtheria, tetanus, and yellow fever, among others.

There are many things that cannot be predicted or controlled to the extent we would like especially with new viruses and their variants, but what can be controlled this year is the State’s approach to vaccination against Covid-19 and it is a big test.

One of the understandable fears at the outset of this pandemic was that the crisis would painfully expose many of the fault lines in our health system and its administration; an updated, parallel concern is that the vaccination programme will be compromised by similar issues.

The challenge is not just about rolling out vaccines competently, but convincing people of their merits and striking the right balance. Under the pre-independence health system, compulsory vaccinations by dispensary medical officers were rigidly enforced.

James Deeny, who served as the state’s chief medical adviser in the 1940s was later to note that in relation to smallpox: “At the turn of the [20th]century Ireland was probably the best vaccinated country in the world; in consequence the last case of smallpox we had was in 1911 in Athy. it was customary to read on one page of the local paper of people being fined for not having lights on their bicycle, and on another of fines being imposed on vaccination defaulters, as they were known”.

Deeny concluded that after independence there was antagonism “to anything made compulsory by the British and of course this included vaccination”. What was crucial for county medical officers in those later years was not just enforcement of public health orders but what Deeny called “powers of persuasion.”

Proponents of vaccinations have always faced obstacles born of contemporary pressures and prejudices. During Deeny’s stewardship, tuberculosis was a terrible scourge; in 1942 alone it killed more than 4,000 people. A group formed that year to raise national consciousness about TB included Catholics and Protestants, medics and lay people, from North and South, but the Catholic Archbishop of Dublin John Charles McQuaid threw it in to disarray by insisting the group be controlled by a Catholic organisation.

Nonetheless the efforts of medics of that era like Dr Pearl Dunlevy, who was central to Dublin’s immunisation programme, were paramount. Dublin was the first local authority in Britain or Ireland to introduce the BCG vaccine which prevented TB; likewise, in 1937, St Ultan’s hospital for infants was the first hospital in Britain and Ireland to introduce BCG due to the efforts of Dr Dorothy Stopford Price.

These things take time; Ireland’s TB epidemic did not come to an end until the late 1950s, not just because of BCG vaccination but also effective antibiotics and public health interventions.

As we face the worst phase of this crisis and severe lockdown, we desperately need the solace of an effectively managed and mature approach to national vaccination and the same clarity and explanations regarding vaccination numbers as we get about infections.