Minister for Health Stephen Donnelly has told the Dáil that he informed the Taoiseach of a conversation he had with CMO Dr Tony Holohan about the possibility of moving the State to Level 4 Covid restrictions before a Nphet meeting on October 4th. 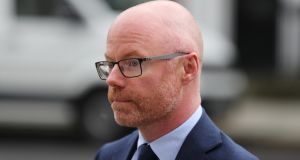 Minister for Health Stephen Donnelly: ‘The information about Level 4 was conveyed to the Taoiseach, yes.’ Photograph Nick Bradshaw/The Irish Times

Minister for Health Stephen Donnelly said he discussed the possibility of moving coronavirus restrictions in the State to Level 4 with chief medical officer Dr Tony Holohan on Sunday and he told the Taoiseach before the meeting of the National Public Health Emergency Team later that day.

He told a specially convened debate in the Dáil Thursday night that the first time he heard Level 5 restrictions mentioned was after the Nphet meeting.

In an ongoing row over the chronology of events last weekend before the Level 5 recommendation was issued by Nphet, Mr Donnelly told the Dáil: “I received a text around lunchtime on Saturday from the chief medical officer to say he had called a meeting of Nphet for the following day. I texted the Taoiseach to let him know.”

He told Sinn Féin TD Matt Carty who asked him what he told Mr Martin: “The information about Level 4 was conveyed to the Taoiseach, yes.”

He said he texted Dr Holohan early on Sunday morning and they spoke by phone.

“We discussed the current situation and the possibility of moving to Level 4. I conveyed my belief that it was important Nphet adhere to the parameters set out in the framework for each level. I contacted the Taoiseach afterwards.

Ultimately the Government decided on Monday to leave restrictions at Level 3 for the whole country, with increased enforcement of them.

Sinn Féin health spokesman David Cullinane asked in the Dáil why the Minister did not “push back” when the chief medical officer said he was so concerned that he might recommend going to Level 4.

“The Taoiseach and Tánaiste were saying they were caught on the hop and that was patently untrue,” he said.

Mr Donnelly said: “Did I try to influence the recommendations? Of course I didn’t. I would never have done such a thing. Nphet’s job is to provide the best public health advice they can to Government.”

Labour TD Duncan Smith said “we are partaking in some kind of Agatha Christie-type mystery as to who said what and when.”

He said they had to discuss what happened last weekend because it had massive implications for people’s confidence “in you, in Nphet, in the Taoiseach and in the Tánaiste who played a particularly foul role in this sad, mean affair”.

Minister for Foreign Affairs Simon Coveney said on Friday that the first he heard about the Nphet recommendation to go to Level 5 was on the 9pm news on Sunday night.

Subsequently he spoke to Tánaiste Leo Varadkar. “When something serious is happening in the country Leo and I tend to talk, we’re the leader and deputy leader of Fine Gael, so you would expect that,” he told RTÉ radio’s Morning Ireland.

“But the version of events that the Tánaiste has outlined and outlined again in the Dáil yesterday, is certainly my experience of what happened, I’m in the government, I’m on the Covid sub committee.

“The more we talk about what happened last Sunday the more we’re distracted away from what we really need to be focussing on - I think it’s been made very clear in the last number of days, the Government and Nphet are working together to try to protect people across the country, we need to focus on working together rather than to trying to probe at divisions.”

Mr Coveney said that there was “a difference of perspective clearly emanating from last weekend where the Chief Medical Officer and Nphet felt they needed to make a recommendation, the Government didn’t agree with that approach and was surprised by it.

“We have moved on from that and are focussing now on what we should be doing which is working together to protect people ensuring that the Government takes on board public health advice as best we can, but also with the broader perspective of having to provide a Government for a country across multiple different areas primarily driven by public health advice, but also with a whole load of other considerations as well and that’s what we’re doing.”

On Monday the Tánaiste Leo Varadkar criticised Dr Holohan and Nphet saying the recommendation to move to Level 5 had not be “thought through” and there had not been “prior consultation” with the Government.

“This was Tony Holohan coming back two days early in a tightening of this pandemic. He has more trust from the public than any of us in this chamber, present or absent put together.”

He also asked when the Minister saw the letter from Nphet recommending the Level 5 restrictions “because it was the leaking of that letter that caused absolute panic”.

The Minister said that on Sunday the chief medical officer “had more information than he had on Saturday because at lunchtime on Saturday the numbers of the day wouldn’t have been in.”

Pressed about the leaking of Nphet’s letter Mr Donnelly said “I know RTÉ reported Level 5 on the news at 9 o’clock.

“I don’t think they got into detail as to what’s in the letter so I don’t know if RTÉ had the letter. It’s possible they were simply told it was Level 5.”at Nphet was meeting on Saturday.