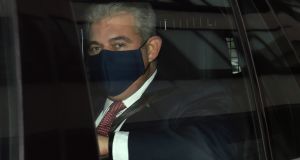 The self-isolation period for people who have been in contact with someone who has tested positive for coronavirus could be reduced from the requirement of 14 days, ministers confirmed on Sunday.

However, Mr Lewis told the BBC’s Andrew Marr Show that officials were now looking at whether there was scope for a cut to the period in light of new information.

“It would be looking at whether we can assess that incubation period of the virus, how people are reacting once we know if they have the virus and making sure that people understand what the guidance is so they’re isolating for the right period of time to protect people in the community around them,” Mr Lewis said.

Reports on Sunday said ministers believed a cut from the current 14-day period to as few as seven days could produce an overall public health benefit because those told to isolate would be more likely to follow the imposed restrictions. There has been anecdotal evidence that people asked to spend two weeks away from others after contact with an infected person have quickly started disregarding the advice.

Mr Lewis referred, however, only to slight reductions in the period and insisted that no firm decisions had yet been taken and that the priority was to “follow the science”. The science had always assessed the necessary isolation period to be about 14 days, he said.

“It’s whether the science will allow us to narrow that a bit,” Mr Lewis added.

The review will take place amid continued controversy over the effectiveness of the UK’s efforts to trace the contacts of people who have tested positive for coronavirus and ask them to isolate.

Bernard Jenkin, the Conservative MP who chairs parliament’s public administration select committee, on Sunday called for Dido Harding, executive chairwoman of the UK’s test and trace programme, to stand down.

“It is the sense that there is a lack of an overall strategy which I think is at the heart of the problem,” Mr Jenkin told Sky News.

He called for Ms Harding to be replaced by a senior military figure.

Rosena Allin-Khan, a Labour health spokesperson, agreed with the call for Ms Harding to stand down, saying on Sunday the executive chairwoman’s position was “untenable”. – Copyright The Financial Times Limited 2020