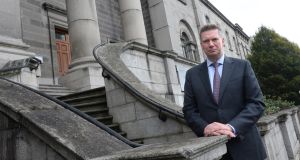 Dr Dermot Power, a consultant at the Mater Hospital in Dublin and a clinical adviser to Nursing Homes Ireland: ‘The virus hasn’t changed. The virus is still an untreatable cause of death in some people.’ Photograph: Dara Mac Donaill

Nursing homes are better able to cope with coronavirus outbreaks than earlier in the year, but for frail, vulnerable and elderly residents Covid-19 remains a “potentially lethal, untreatable condition”, a consultant geriatrician said.

Dermot Power, a consultant at the Mater Hospital in Dublin and a clinical adviser to Nursing Homes Ireland, the representative group for private nursing homes that makes up 80 per cent of the sector, said that it would be “wrong to pretend” that nursing home residents are “any more resilient” to the disease as the second wave of infections has grown and threatens nursing homes.

“The virus hasn’t changed. The virus is still an untreatable cause of death in some people. You throw that virus into a mix of patients who are by definition frail, vulnerable and elderly and inevitably a number of deaths are going to occur,” he said.

He said that mass screening of nursing home employees would help prevent staff shortages that hindered the management of coronavirus outbreaks in the early days of the pandemic.

The passage of the disease from staff to nursing home residents had “diminished significantly” since the first wave because asymptomatic staff infections were being picked up by serial testing.

But he warned that nursing homes might not have access to the same back-up staff support from hospitals during this wave of infection as the healthcare system will not be shut down again.

Concerns have been expressed by the State’s chief medical officer, Dr Tony Holohan, that the widespread community transmission of the disease poses an “existential risk” to older people living in nursing homes with the number of outbreaks rising again.

Dr Power said that nursing homes could be “bubble-wrapped” from the wider community if low-paid care facility staff were paid adequately so they would not have to take second jobs.

However, he said that completely isolating nursing homes was not possible and would be damaging to the care and wellbeing of nursing home residents isolated from family and friends.

“It is nearly impossible to completely isolate a nursing home; certainly within a city environment it becomes even harder as there are multiple points of contact,” he said.

The consultant said that while outbreaks were occurring again, he was not seeing the same severe infections. This might be due to staff wearing masks more now, meaning they are not transmitting a heavy “viral load”, which can determine the severity of an infection, he suggested.

Dr Power said that nursing homes had more personal protective equipment this time around, testing was better and nurses and healthcare workers were better able to manage outbreaks, while infection prevention and control protocols have improved in facilities since the spring.

The consultant, who also works at Fairview Community Unit, the Mater’s post-acute care facility for elderly and other patients, said that the pandemic had exposed public expectations that nursing homes were more of a clinical setting when in fact they were largely a social care model.

“There is a discussion that needs to happen: what do people want from their nursing homes? As a social care entity, they can only do so much,” he said.

He acknowledged the “brutal situation” facing families deciding to put elderly relatives into nursing homes at a time when they are restricted from visiting them under Covid-19 restrictions.

Dr Power said that one family he met recently compared the decision to move their mother into a nursing home to someone emigrating to Australia in the 1850s: “You know they are alive out there but you have no engagement with them.”

There are in the region of 30,000 people living in about 570 nursing homes, making up about 4 per cent of the country’s population of people aged 65 and over.