Fiines of up to €1,000 for those who organise house parties will comes into effect immediately 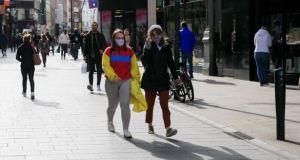 Legislation that allows for on-the-spot fines for non-compliance with public health guidelines during the Covid-19 pandemic. Photograph: Gareth Chaney/Collins

President Michael D Higgins has signed into law legislation that allows for on-the-spot fines for non-compliance with public health guidelines during the Covid-19 pandemic.

The legislation was passed by the Dáil and Seanad on Friday but the specifics of how much people could be fined for not wearing a facemask when required to or for travelling more than 5km from their homes during the Level 5 restrictions is yet to be stipulated.

Minister for Health Stephen Donnelly said these would confirmed in the coming week but he signalled that the initial fine for not wearing a face mask when required to do so could be €50. The Bill allows for fines of up to €1,000 for those who organise house parties and this penalty comes into effect immediately.

In a statement on Sunday, Áras an Uachtaráin said: “Having considered the Health (Amendment) Bill 2020, the President has signed the Bill and it has accordingly become law”.

Mayo Fine Gael TD and former minister Michael Ring last week objected to the provision on fining people for travelling more than 5km from their homes.

He said it discriminated against people in rural areas who had to travel much further to shops and other facilities. He describing the penalty as “Dublin thinking” and did not attend the Dáil for the vote.

The Bill also caused uproar in the Seanad amid claims, including from a Government Senator, that the penalties in relation to house parties were unenforceable.

Senator Barry Ward, a barrister, introduced a number of amendments and said the definition in the Bill of the occupier of a house was unworkable. Under the law as drafted, unless the owner of a dwelling is present, gardaí cannot demand that anyone else in charge of the house direct people at the party to leave.

In addition, gardaí cannot ask the name of the person in charge unless that person is the owner.

He also introduced an amendment to address flaws in the Bill around the issuing by gardaí of fixed-notice penalties. Mr Ward said the Bill had to take account of a whole raft of factors but instead it was drafted on the basis of an either/or option. For a fine to be issued, all factors and not just one had to be considered.

He was supported by Independent Senator Michael McDowell, who said “just because we are dealing with emergency legislation it doesn’t mean the Constitution goes out the window”. Mr McDowell a former attorney general described the legislation as “bizarre” and “flawed”.

Minister of State Frankie Feighan, who was dealing with the Bill in the Seanad, refused to accept the amendments. He said that to do so would delay bringing the enforcement powers into effect and he stressed that “enforcement is a last resort”. Mr Ward withdrew his amendments and the Bill was passed.

The Opposition had called for the Minister to introduce the regulations for the specific offences in the Dáil before the Bill was passed. Sinn Féin health spokesman David Cullinane claimed the Government was seeking a “blank cheque” by not doing so.

Labour leader Alan Kelly, whose party reluctantly supported the Bill because there were some who deliberately flouted public health advice, said the legislation signalled a “step change” in the Government’s approach and warned that public support could collapse if the Government “doesn’t get it right”.