‘We’re not going to be making money for a while,’ general manager acknowledges 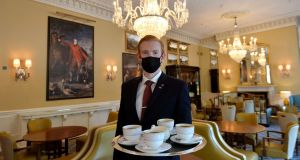 Gary Cahill, director of food and beverage at the Shelbourne Hotel, in the Lord Mayor’s Lounge, which will run at a 50 per cent capacity due to coronavirus restrictions when the hotel opens on June 29th. Photograph: Alan Betson

Some 100 guests will check in to the Shelbourne Hotel on Monday when the five-star property overlooking St Stephen’s Green in Dublin emerges from of its “induced coma” following the Covid-19 lockdown restrictions introduced in March.

“We’ll have about 100 guests staying with us, it’s 40 [booked in] for lunch and about 25 for afternoon tea throughout the sittings ...and 55 to 60 for dinner,” the Shelbourne’s general manager, JP Kavanagh, says.

“Business levels are nowhere near what we would normally do at this time of year. We’d be running at 100 per cent occupancy, which would be around 450 guests but our ability to cope with those numbers has reduced, certainly in the early days [of reopening] as we find our feet.”

Room rates start at €300 per deluxe room a night, including breakfast and parking, compared with €500 normally.

Staff are putting the finishing touches to the new layout at the hotel, which will involve social distancing, perspex screens in certain areas, a new one-way system for moving around the property including separate entrances for entering and exiting, and reduced capacity in its bars, restaurants and banqueting areas.

Staff serving food will wear masks (“thousands” have been bought), as will chefs preparing meals. Guests will have to book slots for breakfast and dinner, the morning food buffet is gone, and the swimming pool will be limited to four people at any one time.

A “toilet butler” will be on hand to manage queues in public areas and an “elevator attendant” will make sure that lifts don’t become overcrowded.

In rooms, hand sanitiser will be provided for guests, robes and slippers will be presented in plastic, snacks have been removed, along with pens and pencils and any glassware will be replaced rather than washed by housekeeping staff.

Four “isolation rooms” are also being set aside (two each for staff and guests) should anyone develop Covid symptoms.

Mr Kavanagh is willing to accept these restrictions so that the hotel can once again open for business. “I’m very hopeful that there won’t be customer resistance. And I think they understand the constraints that we’re being put under. We are trying to maintain a high level of hospitality within the guidelines we have been given.”

The Shelbourne closed mid-March, with the exception of one permanent resident in the hotel, some essential workers and pilots flying cargo for United Airlines.

Mr Kavanagh is under no illusions about the financial challenges still facing the hotel, with its focus shifting from American visitors towards the domestic market. He expects revenue this year will be down by 70 per cent on the €45 million achieved in 2019.

In terms of American visitors, he’s not expecting a sizeable number of them to travel here until at least March of next year. “There is still some hesitance around the first quarter but it’s gangbusters in terms of forward bookings from March,” he said.