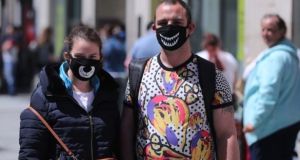 Over €250,000 has been spent by the Health Service Executive (HSE) on a public information campaign encouraging people to wear face coverings to protect against the coronavirus.

Some 41 per cent of people reported wearing face coverings in public in a Department of Health survey this week, up from 34 per cent the previous week.

This is a substantial increase from 16 per cent on May 4th, but at that stage the Government was not advising the public to use face coverings.

The survey sample size was 2,100, and just under half of females said they were wearing face coverings, while only 33 per cent of men surveyed said they had. The survey is based on self-reported responses and is conducted online.

The results have been questioned based on anecdotal reports of low usage of coverings in shops and on public transport.

According to the survey, 94 per cent of respondents said they had worn face coverings in shops, 21 per cent had worn them on public transport, and 33 per cent said they had done so in a healthcare setting.

Minister for Transport Shane Ross is to bring a memo to Cabinet on Thursday to make the wearing of face masks or coverings on all public transport compulsory.

This decision comes as the Government moves to increase capacity on bus, train and Luas services as more people return to work.

From mid-June the HSE began a national advertising campaign to encourage uptake in face coverings, placing adverts on radio, in newspapers and on social media.

The cost of the campaign to date has been approximately €259,000, a HSE spokeswoman said.

The impact of the campaign is to be reviewed by the HSE and Department of Health “to inform any next steps or if we need to continue, change our approach, or focus on a particular group or setting”, a spokeswoman said.

Previously Dr Tony Holohan, the State’s chief medical officer, had said face coverings were not a “magic shield” against coronavirus.

During the early months of the pandemic Dr Holohan and other senior health officials had questioned the strength of evidence behind the use of face coverings to prevent the spread of Covid-19.

There were fears the use of face coverings would make people lax around other measures, such as social distancing, regular hand washing and cough etiquette. Officials also feared widespread use of face masks could lead to shortages in supply for healthcare facilities.

From May 15th the Government officially advised wearing face coverings on public transport or in “enclosed indoor public areas,” such as retail stores.