New maternity hospital will be bound by Irish, not canon, law 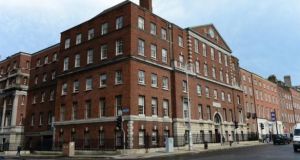 The National Maternity Hospital in Holles Street. The hospital’s relocation project has been beset by controversy, in particular relating to concerns over ethos. Photograph: Bryan O’Brien

The holding company being established to run St Vincent’s University Hospital and the new National Maternity Hospital will be bound by Irish law and not canon law, lawyers for St Vincent’s have told the Department of Health.

The company, St Vincent’s Holdings CLG, is being set up as the owners of St Vincent’s, the Sisters of Charity, cease involvement with the hospital.

The constitution and articles of the new company have been approved by the Charities Regulator and the Revenue Commissioners, according to St Vincent’s, which published the documents on its website on Friday.

McCann Fitzgerald, lawyers for St Vincent’s Healthcare Group, wrote to the department late last month in response to a request for confirmation that canon law would have no impact on the holding company once incorporated.

Donal O Raghallaigh, for McCann Fitzgerald, wrote that he had reviewed the constitution of the company, which will be incorporationed pursuant to the Companies Act 2014 “shortly”.

“The company and its directors will be bound by Irish law and by the provisions of the Constitution. The Constitution makes no reference to Canon Law and Canon Law shall have no impact on the company,” Mr O Raghallaigh says in the letter.

According to the constitution, the main object of the company is to advance healthcare in Ireland by “promoting medical education, medical research and patient care in all areas of medicine through the St Vincent’s Healthcare Group and to reflect compliance with national and international best practice guidelines on medical ethics and the laws of Ireland”.

A subsidiary object will be “to be a valuable part of an Irish healthcare system that achieves best outcomes for patients and their families regardless of race, ethnicity, religion, gender or personal means”.

Another subsidiary object will be to be true to the core values of human dignity, compassion, justice, quality and advocacy.

According to the articles of association, the directors of the company should be appointed after consultation with a number of bodies, whose names have been redacted from the document “pending confirmation”.

A spokeswoman for St Vincent’s said consultation was ongoing with representative bodies in the “health, legal and financial sectors” and these would be listed in the constitution when it is filed with the companies office. The list did not include church bodies, she said.

A long-running dispute over the relocation of the National Maternity Hospital to St Vincent’s is set to come before the NMH’s annual general meeting next Tuesday.

Former NMH master Dr Peter Boylan has written to the board of the hospital seeking to have his objection to the relocation plan put on the agenda of the agm.

Dr Boylan has called for the resignation of NMH deputy chairman Nicky Kearns over his handling of the project, but his call has been rejected by the board.

The relocation project is backed by both the NMH and St Vincent’s, but has been beset by controversy, in particular relating to concerns over ethos. While the Sisters of Charity are withdrawing from all involvement with St Vincent’s, this process has yet to be completed and the project is well behind schedule.