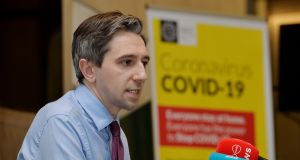 Minister for Health Simon Harris: No specific guidelines were issued for the nursing home sector and weeks went by with no top-level engagement between the Department of Health and private home operators. Photograph: Alan Betson

Why were we not better prepared?

Covid-19 hits older people hardest. From early March, when major outbreaks of the disease occurred in nursing homes in Seattle, there was evidence of its potentially devastating impact in these settings.

Despite these warning flags, Ireland remained largely unprepared for what was to unfold. No specific guidelines were issued for the nursing home sector, weeks went by with no top-level engagement between the Department of Health and private home operators seeking a meeting with the Minister, and decisions about banning visitors were made, reversed and then made again.

While the main focus of preparation was on hospital ICUs, Nursing Homes Ireland (NHI) was left pleading for “specific guidance” and fretting about likely staff shortages. The number of clusters of the disease mushroomed – from a handful towards the end of March, to 50 some 10 days later, and more than 160 this week.

Were there delays in testing?

Delays in testing patients and staff have been a feature of our response across the health system. Nursing homes are no exception; in a recent survey, almost half of private nursing home operators said they had been waiting over 10 days for test results to come back.

All delays are problematic, but they posed a particular challenge in the residential sector, where many staff were working across different locations. The delays meant that workers with the disease, but who had not been tested, went longer undetected, and possibly spread the virus.

Are residents being left to die in nursing homes?

A number of families with relatives in nursing homes have told The Irish Times they have been advised their loved ones will not be transferred to hospital if they contract Covid-19.

The National Public Health Emergency Team (NPHET) has denied such a blanket policy is in place, though they say the default is to treat patients in their nursing homes unless a transfer to hospital is clinically indicated. The HSE has advised nursing homes to manage the disease in their own facilities and only transfer residents to hospitals where this would “confer additional benefit”.

One family told The Irish Times their nursing home, citing HSE “guidelines”, told them residents should not be sent for resuscitation in relation to Covid-19. NPHET have said no such guidelines are in place.

What happened at the Maryborough Centre in Portlaoise after nine people tragically died over Easter is instructive. The remaining 17 patients, some of whom are also reported to be positive for the disease, have been treated on site, rather than being brought to hospital.

Medical teams came out from Portlaoise hospital to treat the residents in their familiar environs. Public health officials maintain they got better treatment because of this approach.

Are families being left in the dark?

A number of families have told The Irish Times they sought and were refused information by nursing homes about outbreaks of Covid-19 in their facilities. The HSE, which publishes information about the number of cases of the disease in individual hospitals, does not publish equivalent information in relation to nursing and other care homes.

NPHET has defended this policy, saying the numbers of patients involved in many centres would be very small and so publication of this information could infringe patients’ confidentiality.

NHI says that in relation to providing guidance to families, it was told by NPHET that patient confidentiality should be respected and that “the Department of Health will provide updated information as necessary”.

NPHET has since clarified that it has no objection to families being informed of, say, the number of cases in an outbreak; in recent days, some individual homes have started providing more information than they had up to now, and the HSE has also issued press statements about major outbreaks in specific locations.

Where is the PPE?

Shortages of personal protective equipment (PPE), and worries about potential shortages, have been a feature of this crisis in recent months across the health system.

Just one-quarter of nursing homes reported having a 100 per cent supply of PPE in a recent NHI survey. Almost 30 per cent said they were awaiting a supply of equipment.

A memo sent to staff by one nursing care group enjoined staff to wear face masks but also to wash them and to “ensure these mask are replaced after 50 washes”.

Mounting evidence about the way the virus can be transmitted before infected people show symptoms points to the urgent need for the use of PPE more widely than might have been anticipated at the start of the outbreak.

Where are the regulators?

Many of the care centres where outbreaks of Covid-19 have occurred are subject to regulation by official bodies. The Health Information and Quality Authority (Hiqa) regulates nursing homes, for example, while the Mental Health Commission oversees standards in mental health centres.

These bodies regularly publish inspection reports that highlight deficiencies in the running of centres, including infection control. Yet little has been heard of the regulators until recently.

Hiqa has published a number of evidence summaries in relation to aspects of Covid-19. Late last month, it was tasked with carrying out risk assessments on homes needing extra support. It has also provided staff for contact tracing.