Taoiseach pledges that 1,000 medicine graduates will be offered an internship 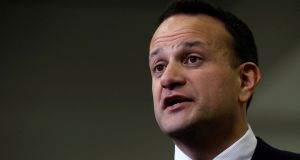 Leo Varadkar, who recently reregistered as a doctor, told the 71 international graduates that he hoped that they would stay and work in the Irish health system for the next year and build their career in Ireland. File photograph: Lorraine O’Sullivan/Reuters

Everyone graduating in medicine in Ireland this year will be offered an internship in the Irish health system as part of the effort to fight the Covid-19 pandemic, Taoiseach, Leo Varadkar has revealed.

Mr Varadkar told 197 graduates in medicine at an online graduation ceremony at University College Cork on Friday that they have an important role to play in helping combat the pandemic over the coming weeks.

“I know we’re living in very strange times as a pandemic affects the world,” said Mr Varadkar in a pre-recorded message to the graduates whose exams and graduation were moved forward to get them into the system quickly.

He acknowledged that the graduates, each of whom was watching the virtual graduation ceremony online from their homes, were unable to celebrate with friends and families as they would have liked.

However, there would be time for such celebrations with friends in the months ahead as scientists develop new treatments including a new vaccine and a much better and more effective testing and contact tracing regime, he said.

“In the meantime, we need you to graduate and start work as interns early, because there’s so much work to be done. I know you will be starting in posts in the middle of May, in hospitals, and also some of you in community settings.

“And for the first time ever, we are providing for over 1,000 internships for medical graduates in Ireland – that pretty much means that everyone graduating this year will be offered an internship,” he said.

Mr Varadkar, who recently reregistered as a doctor, told the 71 international graduates that he hoped that they would stay and work in the Irish health system for the next year and build their career in Ireland.

“I think in the past we haven’t been as fair to doctors from overseas as we might have been, and that’s something we want to change into the future,” said Mr Varadkar in the first online graduation in UCC’s history.

The Government wanted the 126 Irish graduates to do their internship in Ireland and if they chose to travel to develop their skills, he hoped they would return to help improve the Irish health system in the aftermath of the Covid-19 crisis.

“Still, we hope it will go some way towards expressing our gratitude to you, as we celebrate your significant achievements on the occasion of your graduation from University College Cork,” he said.

“Your resilience and adaptability in responding to Covid-19 is genuinely remarkable and has no doubt prepared you for the challenges and rewards of the career path you have chosen.”

Prof Helen Whelton, head of the college of medicine and health, UCC and chief academic officer to the HSE South West Hospital Group also paid tribute to those receiving their medical degrees.

“Worldwide, the leadership, commitment, resilience and excellence of your profession in responding to the Covid-19 pandemic has been acknowledged and lauded,” she said.

“It is a true testament to your character and resolve to have excelled during these unprecedented times. The entire university is proud of you and supports you.”

Among the others to speak at Friday’s virtual graduation ceremony were head of the school of medicine at UCC, Prof Paula O’Leary and chief clinical officer of the HSE, Dr Colm Henry.