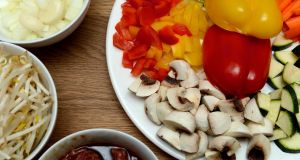 Most of a person’s daily intake should be coming from plants, especially whole grains, fruits and vegetables, legumes and nuts, the report says. Photograph: David Sleator/The Irish Times.

The Irish diet is rich in unsustainable foods and is causing nutritional and financial problems, as well as negatively affecting efforts to reduce global warming, a new study has found.

Research from Trinity College Dublin reported that Irish people consume too much animal protein, and that alcohol consumption accounts for 25 per cent of our daily nutritional cost.

However, the researchers also found that major improvements could be made if Irish people adopt the EAT-Lancet planetary health reference diet, which recommends that most of a person’s daily intake should be coming from plants, especially whole grains, fruits and vegetables, legumes and nuts.

The findings are contained in two new reports, one of which performed a nutri-economic assessment of the Irish diet, while the second looked at the diets of other European countries.

The key findings were that as countries get richer, meat consumption increases and the “healthfulness” of diets declines. The study found the European diet is “particularly unsustainable” given the dependency on red meat, cereals, dairy and animal fats.

It was also found that almost no Mediterranean country currently has a Mediterranean diet, which traditionally consisted of lots of fruit, vegetables, whole grains and seafood, while alcohol consumption is almost five times the calorie intake of legumes.

Adopting the EAT-Lancet ‘planetary healthy’ reference diet could result in major financial savings per capita per day, increased nutritional density of diet, and up to 57 per cent reduction in diet associated Global Warming Potential, the reports add.

Mike Williams, assistant professor in botany in Trinity’s School of Natural Sciences, and lead author of both reports, said global diets have “become more ‘westernised,’ less healthy and more damaging to the environment”.

“Over-consumption of nutritionally poor foods has led to a global crisis in obesity, diabetes, cardiac disease and colon cancer, while the global food industry has failed the environment in terms of its impact on global warming and nitrogen pollution,” Mr Williams said.

“The agriculture sector accounts for 26 per cent of global warming, and in terms of mitigating the effects of agricultural nitrogen pollution, was costing each European approximately $1000 a year,” according to the 2011 European Nitrogen Assessment.