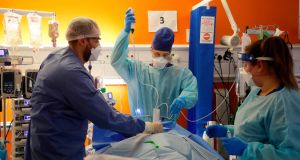 Critical Care staff carry out a tracheostomy procedure on a Covid-19 patient on the Christine Brown ward at King’s College Hospital in London on January 27th. File photograph: Kirsty Wigglesworth/Pool/Getty

A total of 224 people become infected with Covid-19 as a result of a “domino effect” of infection involving two meat plants, according to public health officials.

The outbreak of linked cases was one of a number highlighted by officials at the National Public Health Emergency Team (Nphet) briefing to illustrate how the virus spread easily across different settings when people fail to follow public health rules.

The meat plant outbreak, which occurred in the west last year, started with an outbreak in one facility involving 83 cases, according to Dr Lorraine Doherty, clinical director of the Health Protection Surveillance Centre.

A household contact of one of those infected in the meat plant worked in another processing facility, where 76 people tested positive in a linked outbreak. This in turn led to 19 family outbreaks in private houses, with 35 cases, two community outbreaks with two additional cases.

“It only takes one event to spark a chain of transmission of Covid-19 that can spread through a community,” Dr Doherty noted.

A separate outbreak on a construction site in the north-west involved 11 cases. One of those affected attended a wake, which caused 14 cases. Other people went home and sparked further outbreaks involving a further eight cases.

In a third case study, in the mid-west, an outbreak at a third-level college resulted in 61 cases. One of the students affected waitress at a wedding in a local hotel, leading to 16 further cases among guests and staff.

A further 47 deaths of Covid-19 patients were reported by Nphet, 46 of which occurred in January. This brings to 3,167 the total number of deaths in the pandemic.

Nphet also reported 1,466 confirmed cases of the disease, bringing to 192,645 the total number of cases in the Republic.

The 14-day incidence of the disease stands at 622 cases per 100,000 people nationally. Monaghan has the highest county incidence, followed by Louth.

The reproduction number, a measure of how many other people a case infects, stands at 0.4-0.7, according to Prof Philip Nolan, chair of the Nphet epidemiological modelling advisory group.

Prof Nolan said mobility data shows people were sticking to the public health measures and no “drift” was occurring in people’s behaviours.

Prof Nolan said huge progress has been made in the past week though the level of disease in the population remains very high.

The average number of cases each day is one-quarter of what it was in early January, and the 14-day incidence is one-third of previous levels.

The number of admissions to hospital has almost halved, though ICU numbers remains “high and static”.

Incidence is still twice as high as it was during the October peak, he pointed out, while the average number of deaths is higher than during the first wave last spring.

In this wave, there are proportionately more deaths in the community and fewer in long-term care facilities compared to last spring, he said.

The mean age of cases over the past fortnight is 43 years, with 55 per cent under 45.

On Thursday afternoon, there were 1,567 Covid-19 patients in hospital, of which 216 were in ICU. There were 69 additional hospitalisations in the previous 24 hours.

“Incidence is falling but remains high. It is positive to see numbers of people hospitalised reducing and a stabilisation of numbers in ICU,” said chief medical officer Dr Tony Holohan.

“However, we are continuing to experience high mortality with 878 deaths so far in January. I am concerned about the high incidence we are seeing in long-term care settings and vulnerable groups.”

The variant of Covid-19 first identified in the UK now accounts for 63 per cent of samples tested, up from 58 per cent the previous week.

Prof Nolan said the prevalence of this variant has increased “very little” in recent weeks, due to the effort made by people to limit their contacts. This show that the virus could be suppress, despite the presence of the UK variant.

No cases of another variant first identified in Brazil have been reported in Ireland, while the number of cases of a South African variant of concern remains at nine.

Earlier it emerged that a total of 138 patients and staff were infected in the largest single Covid-19 outbreak to occur in a hospital in January, according to new data.

Meanwhile, 100 people contracted the virus is the largest outbreak in a nursing home, according to the data compiled by Nphet.

Officials say the volume and size of nursing home outbreaks continues to be of concern. Since the start of August, there have been 281 deaths in these settings.

There have been eight deaths in residential institutions following outbreaks of Covid-19, including four in centres for people with disabilities.

The number of outbreaks associated with home-care is also on the rise, with 97 confirmed cases linked to 25 outbreaks; 33 of these cases involved healthcare workers. There have been four deaths linked to home-care outbreaks since November, as well as 13 hospitalisations and one ICU admission.

Up to mid January, there have been a total of 545 outbreaks in nursing homes. Since the start of the pandemic, these outbreaks have involved 10,566 cases of which 712 were hospitalised. There have been 1,169 deaths linked to nursing home and long-stay outbreaks.

Among at risk groups there have been 30 outbreaks involving 285 cases since the start of August 2020. One in five involved children under 15, all of them Roma. There have been no deaths among at-risk groups during this period.

In the month to mid-January, there were 427 cases among Travellers, including 74 in Dublin and 67 in Galway, no ICU admissions and one death.

In addition, there have been 11 new outbreaks in food production or processing centres, one of which involved 53 linked cases.

The number of outbreaks in childcare facilities is also up, with 23 new outbreaks reported in the week to January 18th. The biggest outbreak of 10 link cases involved a mixture of children and adults in the Dublin area.

Despite anecdotal claims to the effect that younger people were more affected in this wave of the of the pandemic, data shows there has been little variation across time by age-group among those hospitalised or in ICU.