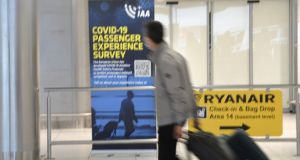 The Government has proposed tighter travel restriction as the Level 5 lockdown is extended until the beginning of March. Photograph: Dara Mac Dónaill / The Irish Times

Visa-free travel from South Africa and most South American countries has been banned, except for in exceptional circumstances, due to the emergence of Covid-19 variants.

Minister for Justice Helen McEntee has signed off on an order, which has ended visa-free short-term travel from Argentina, Bolivia, Brazil, Chile, Colombia, Ecuador, Guyana, Paraguay, Peru, Suriname, and Uruguay as well as South Africa.

The measure came into effect from midnight on Wednesday and is in place until March 5th, when it will come under review along with current restrictions.

“Anyone wishing to travel from these countries for essential purposes must apply for a visa online, and these will be considered with assistance from the relevant Irish embassy on a case by case basis,” a spokesman for the Minister said.

“Generally only applications for long stay visas granted for essential purposes are being considered.”

The Government announced earlier this week that the Level 5 lockdown is extended until the beginning of March and has proposed tighter travel restrictions.

The new measures include mandatory quarantine at a designated facility for people who arrive in Ireland without a negative PCR test taken in the past 72 hours.

Travellers arriving without a negative test could also face a fine of €2,500 or a six-month prison sentence.

All passengers entering the country will be subject to mandatory quarantine either at home or in a hotel, a change from the policy of voluntary self-isolation.

Taoiseach Micheál Martin said the travel legislation was being drafted and regulations were being progressed this week. The Department of Health – which is tasked with implementing them – was unable to offer a firm timeline on when the various measures agreed by the Cabinet would be in place. It said the Government was examining getting these measures into operation as “ a matter of priority”.

Minister for Finance Paschal Donohoe defended the Government’s plans saying they were “really significant” and it had been “really important” to put them in place.

Speaking on RTÉ Radio One’s Morning Ireland, the Minister said the measures were necessary, but that they would be kept under review in case there was a need to strengthen them as “our hospitals and our health workers continue to be dealing with difficult circumstances.”

When asked about the reported division within Cabinet over the mandatory quarantine measures, Mr Donohoe said that while there had been “a lot of debate” on the issue, he believed what had been introduced “will be enough.”

The Minister said he did not know what the cost of the quarantine measures would be as it would take a number of weeks to put the system in place. However, he anticipated that the cost would be “in the low figures.”

He said that of 800 people arriving into Ireland, 542 were Irish and 397 had been on holidays.

Mr Martin told the meeting that legislation was being drafted to introduce the new plans for quarantine of some travellers in hotels and others at home.

Last week, 15,105 people arrived into Dublin, Cork and Shannon airports, according to the latest figures from the Department of Transport, with the capital’s airport accounting for 14,772 of those passengers.

The previous week, January 11th-17th, there were 18,226 arrivals across the three airports. Between January 4th-10th, there were 33,808 arrivals, with Dublin Airport accounting for 32,700 of those. The department said these figures included passengers in transit.

DAA, which operates Dublin and Cork airports, said Amsterdam is the top location for both arrivals and departures currently at Dublin airport.