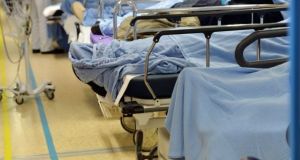 The number of patients in hospital with Covid-19 has continued to fall. Photograph: Alan Betson

More than 400 young people in over 220 households were infected in a Covid-19 outbreak that started among students in the west, the National Public Health Emergency Team (Nphet) briefing has been told.

Within weeks, an outbreak that had started with two clusters of the virus and four cases in four households had spread to affect 179 different households, according to Dr Breda Smyth, director of public health in HSE west.

Ultimately, 442 cases in 224 households were associated with the outbreak, which was driven by students moving to college accommodation in Galway, inter-household mixing and some house parties, she said.

Two restaurants, a hotel, shops and a vulnerable setting were caught up in the outbreak, which led to a separate cluster in another part of the country.

Up to 70 per cent of cases involved the more transmissible B117 variant.

She urged people with symptoms to self-isolate, to come forwards for a testing if there is a case in their social circle and to “think of your actions” and their potential consequences.

A further 39 deaths of Covid-19 patients were reported by Nphet on Thursday. Ten of the deaths occurred in March, 12 in February and 13 in January, with three occurring earlier than this. One further death is under investigation.

Those who died ranged in age up to 97 years and the median age was 81.

This brings to 4,396 the total number of deaths in the pandemic.

Nphet also reported 462 confirmed cases of the disease, bringing to 221,649 the total number of cases in the Republic.

Prof Philip Nolan, chair of the Nphet epidemiological modelling advisory group, said continued, constant but slower progress continues to be made against all indicators of the disease.

Despite the “headwind” created by the B117 variant, the suppression of the virus continues at a stable rate, he said, and the pace may even be improving.

For the first time in this wave, the incidence of the disease among older people has fallen to, or even below, the incidence for the overall population, he noted. The only age group among whom incidence is not falling is those aged up to four years.

The 14-day incidence of the disease now stands at 190 cases per 100,000 people nationally. Offaly has the highest county incidence, followed by Longford. Cork has the lowest incidence.

The reproduction number, a measure of how many other people a case infects, now stands at 0.6-0.9, according to Prof Nolan.

The number of Irish cases of the B1525 variant, which first emerged in the UK and Nigeria, has increased from one to three, officials said. There was no change in the number of other variant cases.

By Thursday morning, 460 Covid-19 patients were hospitalised, of which 107 were in ICU. There were 26 additional hospitalisations in the past 24 hours.

Meanwhile, the number of people in hospital with Covid-19 has continued to fall to 472, according to the latest figures from the Health Service Executive (HSE).

There were 108 patients with the virus in intensive care units (ICU) on Wednesday night. St James’s Hospital in Dublin has 62 Covid-19 cases, the highest number in the country, followed by Connolly Hospital Blanchardstown (46) and Beaumont Hospital (45).

The HSE’s daily operations figures show there are 24 ICU beds available for adults and 6 for children.

A further 25 deaths of Covid-19 patients, were reported by the National Public Health Emergency Team (Nphet) on Wednesday, along with 566 confirmed cases of the disease.

There has now been a total of 4,357 Covid-19 related deaths in Ireland. Of the deaths reported on Wednesday, five occurred in March, 13 occurred in February, and six occurred in January or earlier.

The latest figures from the HSE’s Covid-19 vaccination dashboard show that 81,843 doses were administered between February 22nd-28th.

Last Sunday saw the lowest number of vaccines administered over the week, with just 2,427 first doses and 35 second doses given.

The delays follow a change in AstraZeneca’s vaccine delivery schedule for last week and this week, something the State’s vaccination taskforce was informed of at “very late notice”, group chairman Prof Brian MacCraith said at the weekend.

Prof MacCraith has said the delay was “not a reduction in deliveries” and that the State could “recover completely what had been lost” from next weekend.

The Government previously said the vaccination rollout would accelerate this month with about 100,000 doses being administered per week in March, rising to between 200,000 and 300,000 per week in April.