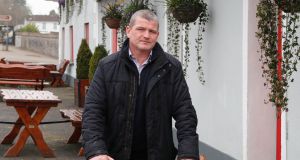 Anthony O’Dwyer: he believes “it is only a minority” causing problems. Photograph Liam Burke/Press 22

Businesses in Castletroy have for years reaped profits from the large student community attending the University of Limerick (UL).

With many operators struggling under the weight of almost a year of Covid-19 restrictions, there was frustration after scores of students gathered in breach of public health advice for a party on Carysfort Avenue on Tuesday.

Anthony O’Dwyer, whose Hurlers Bar would be a popular drinking spot for UL students in normal times, said he was “disappointed” at what had transpired.

He fears the gathering could lead to a rise in cases locally that could potentially prolong the closure of his pub, which has had to lay of 13 part-time staff and has seven full-time workers “on the Covid payment”.

However, Mr O’Dwyer was quick to defend UL and the majority of its students, “who are good customers”. He believed “it is only a minority” causing problems during the crisis.

Earlier in the pandemic the pub provided a takeaway service, but it became clear it was a non-runner. “We found that when we were open the students would congregate in bunches in the carpark, through no fault of their own, and we couldn’t control it,” he said.

While frustrated by Tuesday’s scenes, he recalled being in his early 20s, and agreed it would be “hard to stay at home all day and all night everyday and every night”.

He said those gathering in breach of the rules should be reminded that the problem was potentially passing on Covid-19 to parents and grandparents.

“That’s where the problem is, and we all know this. But they are not playing the game, they are not paying attention,” Mr O’Dwyer said.

David O’Connor, office manager at Shields Dental & Implant Clinic in Castletroy, said the party overnight did not look good at a time when many “feel guilty if we stand too close to somebody”.

He said the party and the videos of it posted online had been the main topic of conversation all day, with staff concerned about community spread of the disease more than ever.

“It was discussed this morning, so we must make sure that, because we are in the (area), that extra attention is being paid over and above what we were doing currently anyway.”

Mr O’Connor said the clinic has been reminding staff not to travel, mix excessively and to follow the health advice “and they are tired of listening to it” at this stage.

“Is last night going to affect business? I wouldn’t have thought so, but there is definitely chatter amongst ourselves about what happened, and about being extra cautions, because you don’t know if the students are going to be in the centre and are they going to touch surfaces. We will continue with our very strict protocols.”