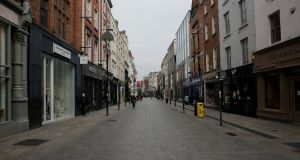 The impact of the pandemic on the public finances is deepening as the crisis enters its second year, with exchequer returns published by the Government on Tuesday showing a widening gap between spending and tax receipts.

The figures show tax receipts for the first two months of the year were more than €800 million less than the same period in 2020, while expenditure was over €2 billion more than last year.

Spending was also €356 million more than the Department of Finance had expected at the beginning of this year.

The main draw on the public purse was spending on the Government’s Employment Wage Subsidy Scheme (EWSS) and the Pandemic Unemployment Payment (PUP). The two schemes fall under the remit of the Department of Social Protection, which spent just under €2.5 billion for the two-month period, which was 35 per cent up on the same period last year.

But there were hopeful signs that the latest phase of the pandemic is coming under control, as the number of Covid-19 cases reported on Tuesday night fell to the lowest level in more than 10 weeks. The National Public Health Emergency Team (Nphet) reported 359 new confirmed cases of the disease, along with a further 14 deaths of Covid-19 patients. This brings to 4,333 the total number of deaths in the pandemic.

And in the health service, the impact of the vaccination programme is being felt with a dramatic fall in infections among staff. Minister for Health Stephen Donnelly told an Oireachtas committee that the HSE was seeing a 95 per cent reduction in the Covid-19 infection rate of hospital staff.

Mr Donnelly also said the large majority of over-85s would have received their first dose of the Covid-19 vaccine by the end of this week. The Minister told the Oireachtas Committee on Health there were some over-85s who were housebound and had not yet been vaccinated and “individual solutions” were being put in place. He said the latest figures showed the State had received 520,000 vaccines, while the forecast is to have administered 500,000 by the end of this week.

But the continuing impact of the pandemic also remains evident. Minister for Housing Darragh O’Brien is set to bring proposals to Government next week that would see protections for tenants struggling to meet their rent due to the Covid-19 pandemic extended for three months.

The measures – which include rent freezes and an increased 90-day notice period for the ending of tenancies – are due to expire on April 12th.

However, they will remain in place until July 12th if Mr O’Brien gets approval for legislative amendments to the Planning and Development, And Residential Tenancies, Act 2020. The changes to the legislation will have to be passed by the Houses of the Oireachtas before the Easter recess to extend the tenancy protections.

Meanwhile, amid cautious preparations in Dublin and Belfast to ease the current restrictions as infection numbers recede, the British Medical Association (BMA) has warned that the approach should be co-ordinated between north and south.

As the Stormont Executive announced its plan to ease out of coronavirus closures, Dr Tom Black, chairman of the BMA in the North, cautioned divergence between Dublin and Belfast could ravage Border areas as people flock from one side to the other.

“They should co-ordinate non-essential retail and should definitely co-ordinate hospitality and personal services, because there would be concerns people will move across the Border to venues that are open,” he told The Irish Times.

“It would be very foolish of the Republic and Northern Ireland to differ in that respect, because we would just end up with high rates of infection around the Border counties,” he said.

On Tuesday, the North’s Executive agreed its Pathway out of Restrictions blueprint, which maps a return to some normality over five phases in nine areas.