Doctors complain of delays and shortcomings in communication 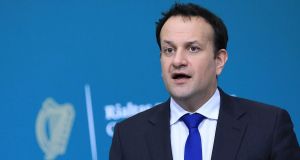 Family doctors have rounded on aspects of the rollout of Covid-19 vaccines, criticising shortcomings in communications and inconsistencies in delivery schedules.

There was also sharp criticism of the effort at meetings of the Fine Gael and Fianna Fáil parliamentary parties on Wednesday night, with Taoiseach Micheál Martin saying he spoke with Paul Reid, the Health Service Executive chief executive, about the vaccine rollout through GPs.

Mayo TD Dara Calleary told party colleagues “We have to get this vaccine rollout right” but that “based on the rollout among over-85s, confidence in the HSE’s ability to do it is shaken”.

Mr Martin acknowledged the frustrations and promised there would be engagement with the HSE to “ensure there is proper communication”.

Tánaiste Leo Varadkar was forced to defend the rollout after criticism by former ministers John Paul Phelan and Regina Doherty. Mr Phelan raised concerns at the failure to meet the target of 100,000 doses being administered last week.

Mr Varadkar had earlier told TDs and Senators he believed the target of vaccinating every adult by September could be met and, he hoped, bettered.

There is also frustration about the matter among senior Ministers, with one saying on Wednesday: “When you put targets out there, you’d want to at least hit them, if not exceed them.”

Dr Denis McAuley, chair of the GP council of the Irish Medical Organisation, said communications issues had emerged this week.

“If the change that occurred in this week is the new normal, it is going to be a very difficult system to roll out,” he said.

Dr Mary Favier, a GP and member of the National Public Health Emergency Team, said a delivery of vaccine due to her had not arrived.

While she had been told to expect its delivery on Thursday, she said, “It is so hard on older patients to be changing clinic times and disappointing them. We hope we don’t have to do that to them tomorrow.”

She said many GPs are “stressed that they have to keep altering patient and staff plans”.

A HSE spokesman acknowledged “there have been some operational issues with ordering and delivery schedules which we have sought to resolve quickly”, but said 1,300 GP practices had taken part in the programme, and a dedicated team, email and support line was in place.