Unlocking Ireland: Is the Covid-19 two-metre physical distancing rule on the way out? 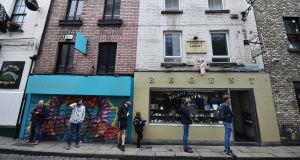 Customers waiting in line outside the Regent Barbers shop in Dublin on Monday. Photograph: Charles McQuillan/Getty

The booths along the window seats at the Elephant & Castle restaurant in Churchtown, south Dublin were busy before lunchtime on Monday with perspex screens safely separating each.

At the back of the restaurant, tables were further apart, at two metres.

Similar measures were in place as restaurants, pubs serving food and hotels across the country as they opened their doors again in the third reopening phase after more than three months of lockdown from Covid-19.

Under health guidelines to protect against coronavirus, restaurants are advised to maintain two metres between tables but if this is not possible, it can be reduced to one metre in controlled environments if pre-booked time-limited slots of a maximum of 90 minutes are followed.

So has the public health advice on the two metre rule changed?

No, not for the time being, according to health specialists.

“It is likely to become more difficulty as more people are out and about but certainly two metres remains the recommendation and is our preferred approach because we know that the greater the distance the lower the risk,” said Cillian De Gascun, director of UCD’s National Virus Reference Laboratory.

The World Health Organisation’s Covid-19 has said that a two-metre distance offers 99 per cent protection and that this falls to 70 per cent at one metre, so neither option is without risk.

Northern Ireland’s Stormont Executive has said that people should keep two metres apart where possible but agreed that from Monday last one-metre distancing would suffice where appropriate mitigations can be made.

Arlene Foster, the Northern Irish First Minister, said that “nothing is risk-free” and said that the move to one metre was possible if other risk mitigations were in place. She cited the hospitality and tourism sectors in her decision.

De Gascun, chairman of the expert advisory group to the State’s National Public Health Emergency Team, said the advice in the State remained that where a distance of only one metre could be maintained, such as in shops, on public transport or in busy spaces, a face covering should be worn.

The limits of even the one metre rule have been made clear, mostly notably by the last minister for education Joe McHugh who warned about reduced class attendances and sizes when students start returning to school in the autumn. One teachers’ union has even warned about strike action if schools do not reopen in line with public health advice or there is a risk to health and safety.

Health specialists say that the response to the pandemic in the country has moved to a phase of personal responsibility where people must make their own risk-based choices.

“We are moving away from a one-size-fits-all rule-based system to one of individual risk analysis and individual responsibility and different rules and different situations,” said Prof Sam McConkey, an infectious diseases specialist at the Royal College of Surgeons in Ireland.

“It is no longer a one-size-fits-all. I know the teachers were struggling with that.”

He accepts the public health message is “much more complicated” than three months ago because it is now coming down to individual choices.

“The two metres are definitely better than one but there are things you just can’t do with two metres and those things are very important to us,” he said, citing close contacts with family members outside a household, children returning to school and healthcare for patients.

Dr De Gascun said that Nphet accepts that one metre distancing will only be possible in some settings but that it will have to assess how the virus is behaving. He does not want to pre-empt Nphet’s decision-making process but says that he does not anticipate any major changes to guidance on distancing until the country is well into phase four of the reopening after July 20th.

“If we get no resurgence in activity and we feel that the levels of virus circulating in the community are very low and it is still perceived that there is an economic impact to the two metre guidance, well then that can be reviewed,” he said.

The ideal scenario is to try to eliminate the virus by getting to the point where Ireland has had 28 days - or two incubation periods of the virus- of no new unexplained community transmissions.

“If we had that, then we could more or less do a very widespread opening up. It might not even be down to one metre. It might be down to zero metres,” said Prof McConkey.

That, however, is still some time away with 24 new infections reported on Monday.