Our warped sense of perspective bodes ill for Ireland's economy

If we don’t manage virus risks sensibly, our economy will rot in the ground 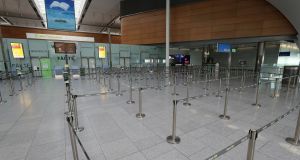 If any of us has earned the right to a holiday, it is the State’s omnipresent chief medical officer, Dr Tony Holohan. Yet his objection to the prospect of anyone else getting away says much about how warped our sense of perspective has become when weighing risk. That bodes ill for the reopening of our economy.

This week, it emerged that Holohan has advised the Government to plan for the future involuntary detention for two weeks of any returning Irish travellers from abroad, in case they import a case of coronavirus.

Holohan didn’t call it involuntary detention. Instead, in his May 8th letter, he called for “a mandatory regime of self-isolation for 14 days at a designated facility for all persons arriving . . . from overseas”.

If people, including returning Irish citizens, have no choice but to spend two weeks at a Government facility away from their homes with their liberty curtailed, what is that if not a system of involuntary detention?

As an ongoing control measure after the first wave has subsided, routine detention of citizens at entry is beyond severe. The law of averages says 97 or 98 out of every 100 of those held for two weeks would be healthy. Ireland would be an outlier in the European Union, even alongside virus-ravaged Italy and Spain. They are lifting their quarantines, which were never in “designated facilities” anyway.

It was an extraordinary call from the chief medical officer that would crush any nascent return of the inbound or outbound travel industries. In the sphere of our civil liberties, it ranks easily among the most draconian proposals from a State official in our history. Yet almost nobody batted an eyelid at it. That fact alone is evidence that we may need to recalibrate our thinking when assessing how to manage risks from the virus. Otherwise, our society and economy will never function.

After months of conditioning from Holohan and others, justified by the scale of the threat, too many of us are still locked in a state of fear that has skewed our sense of how to sensibly mitigate risk.

It is evident in the ongoing resistance to any small reopening of primary schools, the continued shuttering of cafes, restaurants and other businesses, even as they open up abroad, and in our blithe acceptance of the most cautious reopening in Europe. If we use sledgehammers to crack every nut we will never eat. This ingrained fear runs the risk of paralysing our society and economy.

Alongside keeping the virus at bay, walking back that sense of terror among consumers is now the Government’s biggest challenge. If we remain weighed down by it in every human interaction, our economy will sink to the bottom. Caution is a virtue. Fear is a curse.

Holohan is a public health expert acting in good faith. His job is to provide advice to stop people from getting infected. It is not his job to worry about economic destruction or civil liberties, or to dilute his medical advice so society can function. That is meant to be the role of the Cabinet, some of whom have been hiding behind Holohan’s advice from the start.

In his May 8th letter, he made clear that he wants to “eliminate” all non-essential travel and is “concerned that Irish residents may be actively planning to resume travel overseas in the near term for tourist purposes”.

A tentative opening up of Europe’s tourist industry, a calculated risk and only if it is reasonably safe to do so, is the policy of the European Commission. It has suggested that countries look to make it happen from mid-June. Holohan’s advice, if carried out, would make a mockery of that political decision by effectively barring Irish citizens from legal travel abroad.

If community transmission has been effectively suppressed, if there is a speedy system of testing and tracing, if social distancing and hand hygiene is normalised and if Irish tourists visit only European countries that take the same precautions, then how can Holohan’s proposal be proportionate to the risks involved?

The State cannot just go around detaining citizens in “designated facilities” for the comfort of an extra level of protection. You can’t just lock healthy people up to be on the safe side. It is an absurd, dystopian over-reaction.

We must try to regain some sense of who we are and of our values, and manage these risks more sensibly. The Government should be leading this process, not mulling medical advice to hinder it with overkill.

If Italy and Spain can pragmatically strive to allow even a sliver of tourism, why can’t we? Italy will require social distancing of 1 metre in its restaurants from June 1st. Here, if they are allowed to open as planned, four weeks after Italy, restaurants will still require 2 metres. Irish eateries will have to run twice as fast as their Italian counterparts to stay just as still. It is unsustainable.

Are the Italians being pragmatic because they are reckless and too indifferent to the fate of their elder citizens? Or are we just too cautious to see any sense?

During the last economic crisis from 2008, Ireland made a virtue of adhering to the then-prevailing orthodoxy of austerity. We were the bestest boys and girls in the fiscal class, and proud of it. We are trying to repeat the trick now with the most economically and morally-draining lockdown unwinding in Europe.

Some people among us are almost willing on more restrictions. The tougher the better. As if this somehow makes us more moral or serious-minded than the other nations who are facing the same, or greater, threats than we are.

Yet it will only make us more broke. We must look for ways to do, not wallow in ways to do nothing. Otherwise, how will we accrue the necessary resources to pay for the needs of our most vulnerable citizens in the lean years to come?