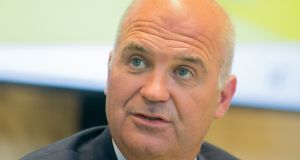 Chief medical officer Dr Tony Holohan expressed concern about a return to “pre-Covid social activity” including house parties among 15- to 34-year-olds where there is “fatigue and frustration” with the lockdown. Photograph: Gareth Chaney/Collins

The public needs “to do a lot better” on wearing face coverings in indoor spaces such as public transport to prevent the spread of coronavirus, the State’s chief medical officer said.

Dr Tony Holohan said public health officials “could always do more” to encourage people to wear face coverings as a survey showed just 41 per cent of people wearing them in public.

This was up from 28 per cent on June 8th and shows face coverings lagging other health measures such as hand washing to prevent the spread of the Covid-19, the virus disease.

“We do need to do a lot better than 41 per cent,” he said at a Department of Health media briefing on Covid-19.

The department reported an additional two deaths from the coronavirus in the State, bringing the death toll to 1,717. Four more Covid-19 cases were confirmed - the lowest number since March 9th - bringing total known cases of the disease in the country to 25,383.

Dr Holohan expressed concern about a return to “pre-Covid social activity” including house parties among 15- to 34-year-olds where there is “fatigue and frustration” with the lockdown.

He warned about younger people who were at lower risk infecting the older, more vulnerable.

The State’s deputy chief medical officer Dr Ronan Glynn said that the low level of face mask use was “a concern” but he hoped it would become “another habit” people would take on.

“It is not something that comes naturally to us and we understand people’s reticence but we do think it is important as we get back to more and more measures being eased,” he said.

He said public health officials were making preparations for measures on regional restrictions instead of blanket lockdowns should Covid-19 infections rise again in parts of the country.

“It is a challenge when you seek to apply sub-national recommendations that you can then be assured that they are targeted precisely to the geographical region,” he said.

The department reported no new increases in the number of clusters in “at risk” groups and just two new cases and one new hospitalisation among meat plant workers.

Out of residential care facilities, 345 of 473 Covid-19 clusters had been “closed” including 190 nursing home clusters out of 260 in that sector, Dr Holohan said.

Figures published by the Health Protection Surveillance Centre, which tracks infections across the country, show that the sexually transmitted diseases have fallen up by 25 per cent in the first 24 weeks of the year compared with the same period last year.

The HPSC data shows a dramatic reduction in cases of mumps, which Dr Holohan had said had been a challenge in third-level educational institutions in the early months of this year.