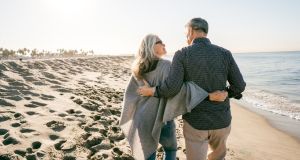 Experts predict a “silver squeeze” will constrict the finances of many workers in their 50s and 60s. Photograph: iStock

If you were planning on retiring soon, don’t. That is the blunt assessment from financial advisers on both sides of the Atlantic who are urging clients to rethink their retirement plans in light of the coronavirus pandemic.

Experts predict a “silver squeeze” will constrict the finances of many workers in their 50s and 60s, due to a combination of weaker investment returns and a contracting labour market, which means a well-paid “second-act” career is less likely for older workers.

“If you retire now, it starts you off behind,” says David Blanchett, head of retirement research at Morningstar. “There’s a really big chance the amount [of savings] you thought you needed won’t be enough and you’ll have to cut back significantly later in retirement.”

This is the time to put retirement plans on hold for six months to two years, he says. However, in an economic downturn, there is a rising risk that many people will be forced to stop working before they are financially, and emotionally, ready.

Experts say future generations will have to adjust their expectations of retirement and re-evaluate financial plans accordingly.

The most affluent baby boomers have enjoyed a retirement “golden age” of international travel and leisure pursuits funded by generous workplace pension schemes, but those approaching retirement today will struggle to replicate this lifestyle.

Since the pandemic began, one-third of US workers over the age of 56 say their confidence in their ability to retire comfortably has declined, according to data from the TransAmerica Centre for Retirement Studies.

More than two-thirds of those surveyed reported a change in their own or their spouse’s employment, such as a reduction of hours, salary, furlough or job loss.

Thirty-two per cent said they had not yet saved enough to comfortably retire, yet 13 per cent lost their jobs and another 6 per cent took early retirement – a trend experts say is just in its infancy.

More than half of workers retire before they plan to, the result of unexpected redundancies, health or family illness, according to the TransAmerica Institute.

“Early retirement is the rule, not the exception,” says Blanchett. Even as today’s workers accept that they will work longer than previous generations – more than two-thirds of workers aged 56 and over say they plan to continue working after the age of 65, or forever – many will not have the opportunity.

“The biggest challenge of Covid is that it won’t reduce the desire for people to work, but it will reduce their ability to work,” says London Business School professor Andrew Scott, author of The New Long Life.

He sees the same trends at work in Europe, and warns that senior employees who are viewed as “expensive” will be targets for employers making cutbacks.

“The people I worry most about are those in their 50s who may be facing the inability to work for longer because of age discrimination,” he says.

Broadly speaking, over-55s who are made redundant are less likely to be re-employed and tend to remain unemployed for longer than younger workers. When they do find employment – perhaps as a self-employed consultant rather than a full-time employee – they often find it harder to replicate the same salary level, meaning they might have to dip into retirement savings to cover expenses.

“As in 2008, there are going to be a significant number of older workers who are essentially forced into early retirement,” says David John from the AARP Public Policy Institute. “This is a serious problem and locks them into a lower income level than they would normally have.”

This leaves professionals with less wealth to work with for retirement purposes – and could force a rethink of any plans to give lump sums to adult children.

Many workers saving for a target retirement date tend to contribute more towards the end of their careers so there is a danger that Covid-related redundancy programmes will cut short their “peak earnings period”.

Nevertheless, experts say the single best thing a person can do to ensure financial security and improve health in retirement is to keep working. “There is nothing that improves a retirement scenario more than delaying retirement,” says Blanchett. “Another year to save, one more year for investments to grow, one less year to fund.”

Although equity markets have rebounded since the start of the crisis, future growth and income prospects remain uncertain and experts fear further volatility could push the timeline for retirement back further.

Even those who do not need to draw on their investments yet may need to recalibrate their plans as markets recover. “It’s not just your losses now, for retirement savings, it’s also the anticipated gains that you’re not going to get [in the future],” says John.

He says investors should not panic and sell into cash or fixed income, or dramatically increase risk to compensate for the low-growth environment.

“The most dangerous thing a person can do is to double down and increase the risk level of their retirement savings. It’s like going into a casino roulette table and putting all your assets on red.”

However, the prospect of lower growth combined with longer lifespans and less generous workplace pension schemes puts people in retirement at risk of running out of money.

This is making retirement more expensive than ever and could pose a bigger threat to people in retirement than market volatility.

Wade Pfau, professor of retirement income at the American College of Financial Services, says: “Even if you’re not forced into retirement, the bar is rising on how many assets you need in order to fund retirement.”

In the past, wealth managers spoke of the “4 per cent rule” – a so-called “safe amount” that investors could draw down from their retirement pot each year without diminishing their capital. To think of it another way, they would need to save 25 times the amount they expect to spend annually to generate enough return.

Looking at financial forecasts, Pfau says: “Drawdown numbers under 3 per cent are more realistic for such a low interest rate environment. Now, instead of 25 times more, you need 33 times more.”

The downward lurch in global interest rates means annuity rates have dropped even lower, meaning the value of the guaranteed income an investor can buy is significantly less than it was in January.

Cash savers were dealt a further blow this week when Goldman Sachs announced it was pausing new applications for its Marcus easy-access account, which has consistently offered market-leading rates, after a surge in applications.

For those who remain invested in retirement, dividend income has rapidly evaporated. Investors are uncertain whether income from equities can be relied on in the years to come, says Philip Wise, a wealth manager with financial planner Informed Choice.

“People are coming to us and saying, ‘Help, I’ve been getting income from my investments, but what do I do now?’,” he says.

Without attractive low-risk options, investors with “no place to go” are pouring money back into the equity markets, although experts fear rebounding prices are misleading and increasingly detached from their underlying value.

Alicia Munnell, director of the Centre for Retirement Research at Boston College, says: “The stock market is almost like buying sheets of paper now, it has nothing to do with the financials of firms. The fact that the values should be lower makes you scared.”

For those planning retirement, setting an investment strategy can feel like choosing between a rock or the hard place. “You can invest in fixed income and go broke with certainty or invest with risk and have to live with the uncertainty of another market shock and going broke anyway,” says Blanchett.

Investors have to choose what level of risk they can live with. Though not a financial one, “always worrying about it is a cost,” he adds.

Apart from working for longer, advisers say the next best thing for boosting your retirement income is controlling spending and managing expectations. This can help with the greatest anxiety surrounding retirement – fear of the unknown.

“For quite a few people, being in lockdown has actually been a trial run for retirement,” says Christine Ross, a client director at Handelsbanken Wealth Management. “They’re not spending on holidays, travel or eating out. It focuses the mind on what is essential spending and what is discretionary.”

And some workers are finding they like their new lifestyles.

“Some are saying I’m actually feeling much better,” says Ross. For some, lockdown has opened the door to choosing early retirement. “They say they’ve started to see that they will be able to afford it.”

Pfau says this is good news for older workers facing a difficult financial future. “This pandemic is showing that people have learnt to adapt in ways that don’t lower your standard of living. You can still be happy.”

Some sacrifices, such as the status that comes with a prestigious job might be the most difficult to part with, he says. “The psychological side of that might actually be harder than overcoming the financial side.” – Copyright The Financial Times Limited 2020