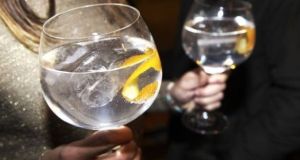 Sales of spirits such as vodka, whiskey and gin have jumped during the Covid-19 crisis but the increase won’t go anywhere near offsetting losses arising from the forced closures of bars, restaurants and nightclubs, according to Irish Distillers managing director Claire Tolan.

She expects on-trade sales to come back slowly once venues reopen in the coming months.

She was speaking as new industry figures from IWSR Drinks Market Analysis show sales of spirits slowed in the Republic last year after jumping 6.5 per cent in 2018.

Overall, spirit sales increased marginally to 2.42 million nine-litre cases in 2019, up 0.7 per cent compared to 2018, with Smirnoff remaining the top selling brand overall.

Tequila was the fastest growing category year-on-year, with volumes rising 6.2 per cent, albeit from a low base of just 16,000 nine-litre cases.

While still the most popular category, sales of vodka rose only marginally in 2019, up just 0.6 per cent. Irish whiskey sales were 1.5 per cent higher over the same period.

Commenting on the figures, Ms Tolan, whose Irish Distillers portfolio includes Jameson, Absolut, Malibu, Beefeater, Pernod and Huzzar, said they show that people are not drinking more but are drinking better, with sales of premium brands increasing dramatically in recent years.

While off-trade sales have increased significantly this year, with consumers spending more during the lockdown, they won’t offset the drop in on-trade.

“It looks like, as a sector, we’re going to be about 30 per cent lower in terms of sales than the year before,” she said.

“Even when bars reopen, we still expect off-trade sales will remain buoyant because people are going to be nervous about going out again and are wondering just how much craic it will be due to social distancing rules.”

Ms Tolan added that sales of exotic drinks such as Kahlua had shot up dramatically during the lockdown due to people making cocktails at home.

“People have been experimenting, trying to have a bit of fun while at home, so things like bitters were almost impossible to get at the start of the lockdown,” she said.

Rounding out the top five most popular spirit brands last year were Gordons with a near 10 per cent rise in sales to 130,000 cases, Hennessy with 102,000 cases and Absolut, which shifted 97,000 cases.