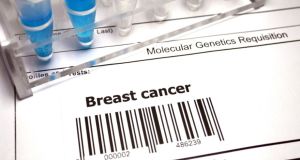 The test was initially made available to almost 700 women in Ireland and a national study showed 58 per cent of this group did not need chemotherapy. Photograph: Getty

The increased availability of a genetic test for breast cancer is ensuring much better outcomes for women in Ireland with the disease and bringing major savings for health services, a senior oncologist has said.

The test provides two pieces of key information – the likely recurrence of cancer and the potential benefit of chemotherapy to a patient after surgery.

Tissue samples are sent to the US for analysis for 21 genetic markers – 16 cancer genes and five reference genes – which indicate if the disease could grow again or spread. Results are usually returned within days.

The Oncotype DX genetic test was initially made available to almost 700 women in Ireland, and a national study showed 58 per cent of this group did not need chemotherapy, with extremely low levels of recurrence of the disease. This was part of an international clinical trial led by Prof Janice Walshe, a consultant oncologist at St Vincent’s University Hospital in Dublin.

The latest indications from the Oncotype test in Ireland, especially with early-stage breast cancer patients, were outlined by Prof Walshe in a research paper to the recent American Society for Clinical Oncology annual conference.

In the paper, she looks back at 963 cases with the help of data analysis from senior registrar Dr Lynda McSorley and answered two questions: how did the test affect use of chemotherapy? And what were the financial advantages for the Health Service Executive (HSE)?

The answers “are impressive” , she concludes. Sixty-nine per cent of patients avoided chemotherapy – 846 of them would have been recommended that course in the past. This resulted in a net saving to the HSE’s National Cancer Control Programme (NCCP) of some €1.2 million. Since 2011, that would amount to some €5 million, Prof Walshe estimates.

But most importantly, she says, “this is having a massive impact on women’s lives”. They are not being subjected to the toxic effects of chemotherapy such as hair loss, nausea and the onset of menopausal symptoms. They are also less vulnerable to infection, a risk heightened during the Covid-19 pandemic. Moreover, negative impacts on work and family life, especially for women with young children, is minimised.

About 3,000 breast cancer cases are detected in Ireland each year, of which about 70 per cent are at the early-stage. Ireland was in 2011 one of the first countries to adopt the test for what is described as “node negative ER positive HER2 negative”, a form of early-stage breast cancer.

Node negative means it has not spread to the lymph nodes, which are part of the immune system. Breast cancers that have oestrogen hormone receptors are called ER-positive while the absence of high levels of a growth-promoting protein in the tumour is denoted HER2-negative.

The success of the initial trial led to the test being made available from April 1st this year to women whose breast cancer has spread to the lymph nodes, following approval from the HSE’s cancer programme. However, private health insurance companies have yet to agree to cover the cost of the test.

The prognosis for women with node-positive breast cancer is worse than for women whose cancer has not spread to lymph nodes, because of “greater ability to develop secondaries” – where cancer starts in one place in the body and spreads elsewhere. Already, however, the test is showing a third of these women will not need chemotherapy and that proportion is likely to rise.

These cases are being evaluated in trials including one led by oncologist Dr Patrick Morris in Dublin’s Beaumont Hospital, which is “already showing fantastic results”, says Prof Walshe.

If these confirm efficacy among these patients too, the test supplied by DNA-testing company Exact Sciences will be available to more than 1,200 women a year in Ireland.

The test assigns a risk score between zero and 100 based on cancer recurrence. Women who have a “recurrence score” in the low-risk range (0-10) are likely to get no benefit from chemotherapy and receive anti-hormone therapy only. Those with a score in the high-risk end (26 and above) are given therapy to block the oestrogen hormone, and chemotherapy. The test is of particular benefit to women over 50 with breast cancer.

At a time when the country faced massive cutbacks in public expenditure, Prof Walshe believes it was a bold decision by then minister for health Mary Harney and Dr Susan O’Reilly (then head of the NCCP) which meant Ireland was among the first countries in the world to offer this novel test – which costs more than €3,000 – to private and public patients for free.

Until 2011 oncologists had limited tools to determine what treatment a patient needed. More often than not, hormone treatment combined with chemotherapy and other treatment decisions were based on classic pathological features of the tumour, notably size and grade, as well as patient age. The genetic test offers other significant benefits to women who avoid chemotherapy and there are other economic benefits that have not yet been examined, Prof Walshe says. “But patients are the best people to outline what these upsides are.”