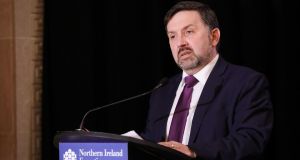 Outbreaks of coronavirus have been identified in 53 care homes in Northern Ireland, according to figures published on Sunday by the North’s Department of Health.

The figure comes as trade union Unison called for an immediate programme of testing for all care home residents and staff in the North amid the coronavirus pandemic.

One person has died in hospital from and 159 more have tested positive for coronavirus in the North in the last 24 hours, according to statistics released by the Public Health Agency (PHA) on Sunday.

A total of 194 people with the novel coronavirus known as Covid-19 have now died in hospital in Northern Ireland.

As of Sunday, 36 people who either tested positive for or were suspected to have coronavirus were in intensive care in the North’s hospitals.

The number of confirmed cases of coronavirus in Northern Ireland now stands at 2,645, with a total of 16,490 tests carried out. Almost 800 tests have been carried out in the last 24 hours.

Figures released on Friday by the Northern Ireland Statistics and Research Agency (Nisra) showed that the number of coronavirus-related deaths in the North was at least one-third higher than previously recorded by the PHA.

According to Nisra, at least 39 suspected coronavirus-related deaths were not recorded in the PHA death toll figures up until the week ending April 10th.

Nisra’s data counts all deaths where coronavirus is mentioned on a death certificate, and includes deaths in care homes and hospices.

There are 483 care homes in Northern Ireland, caring for a maximum of about 16,000 residents.

The North’s Minister for Health, Robin Swann, said last week that all care home residents and staff who displayed symptoms were now being tested.

Unison’s regional secretary, Patricia McKeown, said the North must match the commitment by the Republic to test all care home residents and staff within 10 days.

“We are calling on the Northern Ireland Executive and the [North’s] Minister for Health, in particular, to activate the joint memorandum agreed between both governments [in Ireland on tackling Covid-19] and to commence a parallel programme of testing.

“We do not underestimate the challenges this presents, but a co-ordinated programme across the island has a greater chance of success against a virus that is sweeping through it,” she said.

“Patients and staff are risking their lives. Some are losing them. Delay is not an option,” she added.

Meanwhile, the leader of the SDLP has called for a “bespoke, island-wide strategy” of testing and tracing in order to save lives.

Mr Eastwood was responding to a report by The Sunday Times that the British government missed opportunities earlier this year to lessen the impact of the coronavirus outbreak and that prime minister Boris Johnson had failed to attend five meetings of the key Cobra committee.

He said his party would make the case in the North’s Executive “for a bespoke strategy for testing and tracing on this island that avoids the mistakes other administrations have made.

“Our primary focus remains preventing transmission of this virus and saving lives.”

Earlier this month a Memorandum of Understanding was agreed between North and South which recognised a “compelling case for strong co-operation, including information sharing and, where appropriate, a common approach to action in both jurisdictions”.