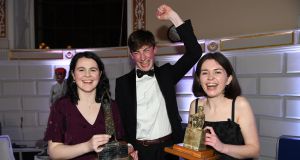 Speakers were competing for the Demosthenes Trophy for best team, and the Christina Murphy Memorial Trophy for best individual, as well as a place on a month-long tour of the US for the three winning speakers.

The grand final of the competition took place before an audience including former winners and finalists stretching back over six decades at Trinity’s Public Theatre.

The motion up for debate , “This house believes that the Irish criminal justice system is too weak on crime”, resulted in combative and entertaining contributions from teams representing UCD, Trinity, NUI Galway and the Law Society of Ireland.

The final of the debate, the country’s longest third-level debating competition, was chaired by the Chief Justice, Mr Justice Frank Clarke, a former finalist.

The judging panel noted the particularly high quality of debate this year and how little separated the winning teams and runners-up.

This year’s runner up was the UCD Law team of Mark Smyth and Cora Keegan. The individual runner-up was Harry Hogan of TCD Phil.

This year’s competition kicked off last October, with 162 third-level students vying to be crowned champions.

Paired into teams of two, they faced off in the debating chambers of universities throughout the country including Queen’s University Belfast, UCC and UCD.

Four semi-finals, each producing one team and one individual winner, were held earlier this month to decide the finalists for the grand final.

The competition has been an early proving ground for many who have gone on to forge distinguished careers in law, medicine, theatre, media and politics.