HSE warns coronavirus will spread within the community ‘within weeks’ 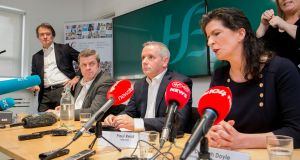 The coronavirus will be spreading within the community in Ireland “within weeks”, according to a senior HSE official.

While Ireland has recorded six individual cases of the disease, there has been no evidence to date of the sort of person-to-person transmission seen in many other European countries.

However, HSE specialist in public health medicine Dr Sarah Doyle said the virus would be spreading in the community soon.

In response, control measures may need to be implemented, nationally or regionally. This would be determined by local directors of public health and may include the need to close schools.

People needed to get ready by taking prevention and control measures in all settings - home, work, schools and public areas.

Priority groups, such as healthcare workers needed to care for people with the virus, and vulnerable groups such the elderly, pregnant women and people with underlying conditions would need protection.

Dr Doyle told the weekly HSE briefing on the virus that Ireland was a nation with a tradition of solidarity “and we have come through previous crises”. Delaying the onset of cases was critical in terms of allowing us time to prepare and to slow the impact on the health system.

The head of the Health Service Executive has said that Ireland remains in a containment phase in relation to the coronavirus disease.

HSE chief executive Paul Reid said Ireland was currently seeking to contain the virus but it would be a challenge to maintain this phase and prepare for further phases.

HSE officials also said they have lodged complaints with social media companies over “egregious” posts that could serve to identify individuals.

Mr Reid expressed particular concern about posts that identified areas where testing was taking place. “That’s what we want to avoid, the stigmatisation of people or places,” he said.

A healthcare professional in Clare is among the latest group of people to test positive for the Covid-19, The Irish Times understands.

The person worked a shift in a hospital emergency department since returning from northern Italy, it is also understood. He was one of four people, two males and two females from the same family, who tested positive for the disease on Wednesday evening.

Students nurses who worked at the hospital on the day he worked the shift have been advised to self-isolate.

In a text message, the student nurses were told to isolate until Thursday, March 12th if they were in the ED on that day and were told to “await further instructions” via an in-house messaging system, and that “there is currently an emergency hospital meeting regarding same”.

It is believed the family had returned from Italy for a substantial number of days before they experienced symptoms and required testing.

The process of tracing the contacts of the family is under way, but it is likely to provide arduous given the number of people involved and their work and educational routines.

The cases, the first cluster of positive tests in the Republic, has forced the closure of three schools on Thursday as a precautionary measure.

Earlier on Thursday,Mr Reid, described the coronavirus as “an unprecedented situation” and called on the public to “keep focused”.

Mr Reid told Newstalk’s Pat Kenny show that he was urging the public to do everything asked of them by the HSE and public health officials. People should not create a sense of panic nor should there be a sense of complacency, he said.

He said €20 million is being spent to bring 25 new ICU beds into operation, with recruitment taking place to staff them. A further €20 million has also been spent on protective equipment for staff.

Mr Reid said he understood the frustration after the HSE declined to name schools involved, but said that it was a challenge for the HSE to “get the right balance” for the appropriate actions for the benefit of “everyone across the country.”

He encouraged everyone to go to the HSE website for detailed advice and said that the contact traceability process is ongoing in Clare and that where schools were involved they have been informed. “We have to ensure we don’t have areas stigmatised or panic. It is not good practice to identify anyone in this process,” he said.

Hand hygiene and coughing/sneezing etiquette were important to keep the virus in the containment phase, he said. “We are following WHO and ECDC advice. We are monitoring the situation on an hourly basis,” said Mr Reid.

A longer containment phase meant that the health service can build capacity, he said.

Mr Reid declined to predict the numbers that could be infected by the virus. The aim is to prevent a surge of people going to hospital which was why home testing by the ambulance service have been introduced, he said.

Part of the HSE’s escalation plan is to contain the surge, to increase ICU beds and for hospitals to plan “a pathway” of where cases will be brought.

The HSE will do what is required and resources will be provided to contain the virus for as long as possible, he said. If staff get sick themselves, agency nurses will be brought in.

Mr Reid said the HSE has gotten the fullest support from the Government. He went on to thank the staff in the public health service for their “very inspiring response which has been phenomenal”.

He said: “There is a need for the public to take this seriously, if they do we will contain this for as long as possible. But we have to prepare for the next scenario.”