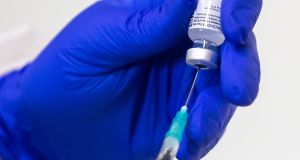 People should continue to seek to have flu vaccinations as soon as possible despite zero cases being reported so far this winter, the State’s leading virologist has advised.

The Health Protection Surveillance Centre (HPSC) has found that no confirmed cases of either influenza A or influenza B have been reported in the State since late spring. The zero cases is an unprecedented scenario and compares to hundreds of cases reported last winter, including more than 450 in the fortnight running up to Christmas, when influenza was at its peak.

The absence of any flu cases has reduced the probability of a “twindemic”, where influenza and Covid-19 are circulating at the same time. Such a scenario would put the health service under severe pressure.

Dr Cillian de Gascun, head of the National Virus Reference Laboratory, said it’s probably too early to say with certainty that the influenza season will be mild.

“The season typically peaks in the first quarter of the year [January to March 2020] but based on the experience in the southern hemisphere, there is reason to be hopeful,” he said.

He also said it was premature to say a twindemic would not happen but added that the near complete absence of influenza activity at this time is very promising.

He said it remained his advice for people to take the flu vaccine.

“We have no idea what will happen in the new year, and the vaccine requires two weeks to take effect, so now is the time to get it.

“The primary benefit of taking the influenza vaccine – in the setting of a coronavirus pandemic – is that it will prevent morbidity and mortality, thereby taking pressure off the acute hospital system.”

The absence of flu in Ireland mirrors the experience elsewhere in Europe and also in the southern hemisphere, which had practically no flu cases during its winter in the middle of the year.

The clampdown on international travel, mask-wearing and social-distancing measures adopted for Covid-19, as well as an uptick in use of the flu vaccine, have all been attributed to the absence of flu.

While there have been no confirmed cases, the number of Irish people consulting their doctors with flu-like symptoms has been higher than last year for the past five weeks. The HSPC has said this reflects the circulation of Covid-19 in the community rather than influenza viruses.

Prof Karina Butler, chair of the National Immunisation Advisory Committee, said one of the reasons Italy had such a bad first wave last spring was because Covid-19 and flu were circulating at the same time. “You really don’t want to have the two co-circulating.”

People recovering from flu are often run down and may therefore be more susceptible to severe Covid-19 illness, she said.

Prof Butler said the normal flu season in the southern hemisphere “did not occur” earlier this year.

While the reasons for this were not certain, it appeared that lockdown, mask-wearing and other public health measures introduced to combat Covid-19 had also reduced transmission of flu, she said.

Separately, respiratory syncytial virus (RSV), a contagious virus that infects the respiratory tract of children is also absent in Ireland this winter. However, in Australia, RSV occurred later in the year, during their summertime, according to Prof Butler.