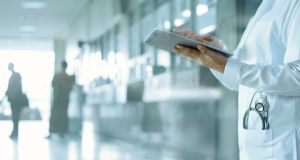 Taoiseach Micheál Martin said it was hoped to underpin ongoing cross-Border healthcare with legislation after the end of the Brexit transition period. File photograph: Getty Images/iStockphoto

A cross-Border health initiative that allows patients to travel to the North for treatment will continue “on an administrative” basis into the new year despite Brexit, the Dáil has been told.

He was responding to a question from Independent TD Michael Collins, who with Kerry TDs Danny and Michael Healy-Rae arranges buses for people to travel to the North for procedures including cataract, hip and knee operations.

Under an EU directive eligible patients can seek treatment in other member states where there is availability, with such treatment for Irish patients then reimbursed by the HSE. The directive comes to an end in relation to the UK at the end of the month with its formal departure from the EU, and the Taoiseach told the Dáil on Wednesday that “we have to develop a scheme unilaterally” following the UK’s exit.

Two private hospitals in the North provide the services for cross-Border patients. The type of scheme in mind “will provide that Irish residents can continue to access services provided by private health service providers in the UK post the end of the transition period.

“We will continue on an administrative basis and then underpin it with legislation,” the Taoiseach said.

Earlier Sinn Féin leader Mary Lou McDonald accused the Taoiseach of being “afraid to do the right thing” to create affordable homes because “he does not want to upset developers and landlords”.

Accusing the Taoiseach of being in an “ideological cul-de-sac”, she said the Government puts €1 billion into the pockets of landlords by subsidising social housing tenants in the rental market.

Ms McDonald questioned the Taoiseach about the absence of the Government’s “long-promised affordable housing plan”, first pledged for publication in September by Minister for Housing Darragh O’Brien.

“At the sharpest end of this crisis, the number of people using homeless services has increased and we know that the true level of those experiencing homelessness is at least 20 per cent greater than official Government figures would show.”

But the Taoiseach said Mr O’Brien had hit the ground running and had brought 2,500 “void” or empty houses back into use.

He said 12,750 social homes will be built next year and 9,500 of them will be overseen by local authorities, while the remainder will be leased out.