Daily bath ‘may lower risk’ of heart disease and stroke

Japanese study involved 30,000 adults who were monitored for period of almost 20 years 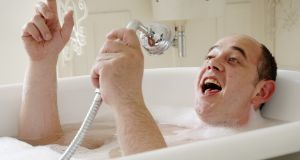 Taking a daily bath could significantly lower the risk of heart disease and stroke, according to newly-published research. File photograph: Getty Images.

Taking a daily bath could significantly lower the risk of heart disease and stroke, according to newly-published research.

Researchers have looked at the bathing habits of more than 30,000 adults, aged between 45 and 59, who took part in a long-term study by the Japan Public Health Centre between 1990 to 2009.

As well as disclosing their hygiene habits, the participants also detailed potentially influential lifestyle factors such as exercise, diet, alcohol intake, weight, sleeping habits, medical history and medication. Participants were monitored until they died or until the end of the study.

Over almost two decades 2,097 of the participants suffered cardiovascular disease, 275 had heart attacks, 53 succumbed to sudden cardiac deaths and 1,769 had strokes.

Furthermore, it was found that the temperature of the bath had a bearing when it comes to the risk of heart disease. Those who preferred a hot bath showed a 35 per cent lower risk of overall cardiovascular disease compared to a 26 per cent lower risk for those who liked it just warm.

However, the report authors say, water temperature had no significant impact on overall stroke risk.

Researchers note that when participants who developed cardiovascular disease within five or 10 years of the start of the study are excluded, the associations found “weren’t quite as strong”. But they remained nevertheless “statistically significant”, they added.

“This is an observational study, and as such, can’t establish cause, added to which changes in bathing frequency weren’t tracked during the monitoring period,” the researchers said.

“The typical style of Japanese bathing also includes immersion to shoulder height, and this may be a critical factor.”

Previously published research has pointed to a link between heat exposure and reduced risk of cardiovascular disease. The effects of heat on the body are not dissimilar to those of exercise.

“We found that frequent tub bathing was significantly associated with a lower risk of hypertension, suggesting that a beneficial effect of tub bathing on risk of [cardiovascular disease] may in part be due to a reduced risk of developing hypertension,” the researchers concluded.

But the medical journal also warned about the risks of taking a hot bath, pointing out that sudden deaths associated with hot baths is “relatively common in Japan, where the study was conducted.”