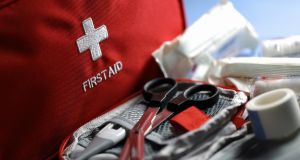 Community first responders (CFRs), who attend local patients before the ambulance arrives, are scaling back their operations due to coronavirus.

The responders, who act as a bridge between the emergency beginning and paramedics arriving, are volunteers trained by the Health Service Executive’s national ambulance service to help patients during cardiac arrest, stroke or choking.

However, in a letter to responders on March 13th, Cathal O’Donnell, medical director of the national ambulance service, said CFR groups should not respond to chest pain or stroke calls for the duration of the coronavirus, also known as Covid-19, outbreak.

Prof O’Donnell also told community first responders that in cardiac cases, the responders should only do compression-only CPR, meaning they should not engage in mouth to mouth.

“CFRs can be a powerful force in their communities as role models in matters like handwashing, cough etiquette and social distancing, as well as keeping an eye on older or vulnerable persons locally who may needs some assistance or reassurance,” he added.

A number of groups have advised the HSE that they have decided to stand down completely from all calls at this time due to the virus.

A spokeswoman for the national ambulance service, said the decision to stand down is “up to each group to decide what is best for their voluntary group”.

One Dublin responder, who requested to be anonymous, said that groups are ceasing to operate to protect “both themselves and their families” due to a lack of personal protective equipment.

“The personal protective equipment for responders isn’t adequate. Everything has to be sourced yourself so we can get gloves handily enough but masks and gowns are a whole different ball game. They’re just not being provided,” the responder said.

“It’s a downgrading of the service, but realistically [the health service] has to prioritise who gets the equipment, so on one hand you can understand it.”

He added that 95 per cent of calls that responders attend are chest pains and strokes, meaning even the groups still in operation have a “significantly reduced” demand for their service.

Clontarf CFR group in Co Dublin and Blennerville Derrymore CFRs in Co Kerry are two of the groups who have stood down from all callouts for the foreseeable future.

The decision was made on safety grounds because the members don’t have full protective equipment and are not fully trained on how to dispose of that equipment in the current crisis, members said.

In a statement to The Irish Times, the national ambulance service thanked CFR groups for their “continued support to their communities”, adding that these measures are only in place for “the duration of the current public health emergency”.

The spokeswoman for the national ambulance service added that it “continues to support CFR groups by offering advice to the volunteers to ensure they put their own health, safety and wellbeing first when responding to an emergency call.

“The community engagement officers within the national ambulance service will continue to advise groups as the Covid-19 situation evolves.”