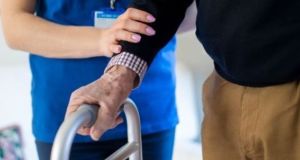 Newly released internal documents reveal the depth of the crisis at the privately run Dealgan House Nursing Home in Dundalk, Co Louth, in April as it battled a coronavirus outbreak that led to the deaths of 22 residents. Photograph: Getty Images

The HSE considered calling in the Army and Red Cross to a Co Louth nursing home during one of the State’s worst coronavirus outbreaks at the peak of the pandemic, records show.

Newly released internal documents reveal the depth of the crisis at the privately run Dealgan House Nursing Home in Dundalk, Co Louth in April as it battled a coronavirus outbreak that led to the deaths of 22 residents.

In the days after the home appealed to then minister for health Simon Harris and chief medical officer Dr Tony Holohan for help, HSE managers contemplated calling in the Army to clean the home and provide fluids to 71 residents who were dehydrated due to staff shortages.

A note of a teleconference call on April 13th on the home’s outbreak states that HSE staff along with local doctors, consultants and hospital management discussed “exploring the sourcing of support staff from the Red Cross and the Defence Forces but there are issues surrounding this”.

Patricia Whelehan, a HSE manager for older persons, emailed the HSE’s head of social care services, Mairead Lyons, and other managers at 9.45pm that night saying that Dealgan House has “serious staffing issues for nursing, carers and cleaners, and is struggling to provide basic care”.

She said the facility was unable to carry out the cleaning required for infection prevention and control and external cleaning contractors were unwilling to enter coronavirus-positive units.

The facility’s staff of 104 had been reduced to 34 and the home had a shortage of bins, hand gel and thermometer ear covers, which meant temperatures could only be taken once a day.

The email proposes “escalation” to request Army support who could be trained on infection prevention and control, while Army medics “could provide fluids”.

She said Dealgan House had earlier reported an urgent requirement for relief staff as the situation “remains critical with 71 residents completely dehydrated due to staff shortages”.

By April 13th, six residents had died, six had been transferred to Our Lady of Lourdes Hospital in Drogheda and one had gone home. Among the remaining 71 residents, there were 19 suspected cases of the virus with five testing positive, eight swabbed and six new referrals for testing.

These 19 suspected cases “present no hope of a good outcome as indeed for the remainder of the residents if they are dehydrated”, the nursing home reported to the HSE manager.

“The first person in the isolated, dementia unit has today shown symptoms. No area is free. Carers are urgently needed to care for the residents. Basic hygiene is not enough today.”

Fintan Farrelly, a director of Dealgan House and father of one of the home’s owners Eoin Farrelly, emailed the HSE on April 14th to say he was “very disturbed” to hear paramedics refused to take two residents to hospital because they felt they did not merit hospitalisation when a nurse felt they would benefit”.

“It seems that elderly people are being denied a fighting chance of surviving the virus . . . It is grossly unfair and wrong,” he said.

On April 14th an urgent teleconference call was held with Dealgan House management, HSE officials and doctors after the HSE was told at 5.30pm that day the home had only one junior nurse on duty that night and “she is not happy taking responsibility for 69 people and 15 residents who are suspected Covid along with the other frail and vulnerable residents”.

On April 17th, the Royal College of Surgeons in Ireland hospital group took over the running of the home to ensure safe staffing levels and ran it until May when the outbreak ended.

A spokesman for Dealgan House said on Friday it has not had a resident test positive for the virus since April 22nd and there has been no HSE or RCSI involvement since May.

Fine Gael TD for Louth Fergus O’Dowd said that he was “absolutely shocked and horrified” at what he read of what had occurred.