Taoiseach Leo Varadkar has told the country that this St Patrick’s Day is a day no one will ever forget. Video: RTÉ 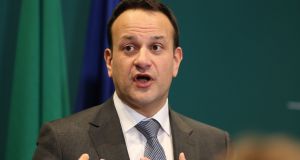 Taoiseach Leo Varadkar made a masterly speech on Tuesday: it was reasoned, realistic yet reassuring. ‘One for the ages’. Photograph: Nick Bradshaw/The Irish Times

Where were you the night Leo Varadkar made that speech? It’s a question few will ask. Because the answer is the very reason he delivered it.

You were at home on Tuesday. Almost everyone was at home – or what passes for it. Driven indoors by a rampant virus with the power to shatter their lives, as it has already done to countless innocents around the world.

Because there was nowhere else to go. It had been “a Saint Patrick’s Day like no other” remarked Varadkar.

“A day that none of us will ever forget.” And in the strangely silent night of that unforgettable national day, with Government Buildings bathed defiantly in luminous green light, the Taoiseach stepped up and addressed an anxious nation waiting to hear him speak.

The right words were there when they were needed most. This was appreciated. For these are frightening times. People are scared. Worried about protecting themselves and the health of their loved ones and worried sick about what might happen if they can’t work and pay the bills.

It was a masterly speech from a skilled and elegant pen, one for the history books. It was reasoned, very realistic yet reassuring

This is where cynicism subsides. When people forget to give out and look instead to politicians for leadership and direction and actually hope it might be there.

On Tuesday night in Dublin, Leo Varadkar did not let them down.

In the run-up to his television address, the national mood stiffened in uneasy anticipation of what bad news he had in store. At 9pm, there would be a rare schedule interruption under Section 122 of the Broadcast Act, which allows the Government airtime for announcements in the event of a major emergency. People were expecting the worst.

In years to come, let them say of us: when things were at their worst, WE were at our best

There was no big drama from Varadkar. No talk, yet, of military boots on the ground. No unveiling, yet, of immediate plans to escalate the containment measures already in place.

Instead, the Taoiseach delivered a calm and honest assessment of where we are now, the grim likelihood of what will happen next, what the authorities know and what the professionals can do and how we must all play our part in combating this pandemic.

By working together and looking out for each other, we can overcome. It was a masterly speech from a skilled and elegant pen, one for the history books. It was reasoned, very realistic yet reassuring.

There was empathy, clarity and at the end, hope. His powerful words traced a defining moment in Irish life and nailed down the speech of Leo Varadkar’s life. This was for the generations.

“In years to come, let them say of us: when things were at their worst, WE were at our best”. Some listeners said afterwards that this line – it came very early in Varadkar’s 12 minutes — was when they first began welling up.

It took a while longer for others, but by the end, a lot of us were feeling emotional. It’s been a difficult few weeks. The setting was different. The Taoiseach wasn’t sitting in his office behind a big wooden desk with the trappings of political success around him.

Instead, he stood at a lectern in the white-walled corridor outside it, framed by the Irish and the EU flag. Neutral ground for a commendably non-political speech. He didn’t sweeten the pill.

“Most of you want to know when this will be over. The truth is we don’t know yet.” By the end of the month we will probably have 15,000 cases of Covid-19 and that figure will rise in the following weeks. Some will be hospitalised and some will die. But there is a defence strategy and it involves a full community effort.

“This is the calm before the storm. Before the surge. And when it comes – and it will come – never will so many ask so much of so few.”

Desperate times require extraordinary lines. Leo communicated them flawlessly. Aside from the dedicated workers – “not all superheroes wear capes, some wear scrubs and gowns” and some bravely sit at supermarket tills and some drive the trucks to keep the supply chain moving – the Taoiseach was primarily sounding a passionate call to arms to every individual in the country.

To the children, cooped up at home and probably bored. Help your parents, do your homework and cheer up isolated grannies and granddads by calling them up on the phone. To the elderly and people with health issues – stay at home. Systems are being put in place to look after you. “We call this “cocooning” and it will save many lives.”

A small detail, but one which drew in and enlisted the listener. This is an emergency. Make social distancing work. Plan your life around it. “We are asking people to come together as a nation by staying apart from each other.”

He even tackled the putrid creep of deliberately misleading information, cautioning people to take their information from reliable sources

The economic consequences will be dire. “Everybody must show solidarity in this time of national sacrifice” stressed the Taoiseach. There must be “help and understanding from those who can give it, particularly the banks.” While the national coffers are in good order and we have the wherewithal “to borrow billions if we need to” the bill will be “enormous” and the damage significant and long-term.

But Leo was putting all the information out there, with strategy follow ups. Showing guidance and leadership. It’s all very scary and upsetting, but, dear God, look at and listen to the “leadership” emanating from the two big countries on either side of us and then look and listen again to Leo Varadkar and his Ministers, along with their principled political rivals rowing in with cross-party support.

Things could be an awful lot worse. He even tackled the putrid creep of deliberately misleading information, cautioning people to take their information from reliable sources – at government and HSE level and from professional journalistic sources.

Don’t spread unreliable stories doing the rounds on social media. And take your noses out of your phones for the betterment of your mental health. “We must insulate our communities and the most vulnerable from the contagion of fear. Fear is a virus in itself.”

Despite the gloom, there was comfort in that speech. And not a dry eye in the house after the closing lines — a rallying cry to Ireland and to the world. On his day, there was a touch of St Patrick’s Breastplate to the Taoiseach’s valedictory remarks.

Leo Varadkar, supposedly a lame duck Taoiseach after his general election defeat, rose to the moment. “I know many of you are feeling scared and overwhelmed. That is a normal reaction, but we will get through this and we will prevail.”

And never, ever forget this Saint Patrick’s Day.