Belfast councillor calls for clearer guidance on protecting the homeless 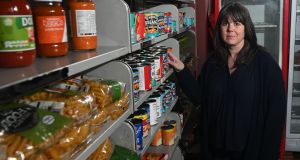 For many of Belfast’s homeless who depend on services that are stretched to breaking point in normal times, the Covid-19 virus threatens not just services, but lives.

“There is a lot of panic and worry within the homeless community,” said Paul McCusker, a Belfast councillor, who has called for clearer guidance from the Stormont authorities on how the most vulnerable can be protected.

In the absence of clear instructions, hostels, drop-in centres and outreach services have been turning to each other for advice on hygiene and self-isolation tactics that will work in their services.

Hostels with communal kitchens and bathrooms are usually full. Many occupants already suffer with addictions, physical or mental health issues. Self-isolation is difficult to manage.

Those outside face even steeper obstacles. Hand-washing for them is difficult, if not impossible, particularly when many public places restrict access to bathrooms. Hand sanitisers are unavailable.

No guidance has been given on self-isolation for those sleeping rough. Equally, street beggars are likely to collect less on empty streets.

Those working with the homeless fear Covid-19 will put strains on their already compromised immune systems, making them more susceptible to the virus, as well as other diseases.

Other diseases, such as TB, already spread faster among the homeless: “So we could see a higher death rate among this population, which I’m massively concerned about,” said a Belfast harm-reduction worker.

Questioned about preparations, the Department of Communities said it was working with homeless, health and housing agencies to draw up plans to help “this very vulnerable group”.

“Protecting the health and wellbeing of homeless people in our society is a cross-government issue,” said a spokesperson for the Department of Health.

The virus could add to homeless numbers, said Catherine Feely, advice services manager at the Housing Rights Service, echoing fears that many people “will worry about being able to pay rent or mortgages”.

On average, Northern Ireland workers have just over a month’s worth of savings, leading to calls for rent and mortgages freezes. So far, no specific action has been taken by Stormont.

The Department for Communities said people who were self-isolating would not lose access to welfare benefits if they missed an appointment. “Nobody will be penalised for doing the right thing,” it said.

The Department of Communities declined to say if extra staff would be drafted in to help with queues.

The Larder in east Belfast, one of Northern Ireland’s many independent food banks, saw nearly a third more people going to them for help last year.

That number has jumped by half as much again in the past fortnight. “The sense of panic in the community in food banks is palpable,” said the Larder’s community co-ordinator, Louise Ferguson.

“It does feel like we are teetering on an edge here, with the welfare reform, and cuts and everything,” Ms Ferguson said. “Even the back-up to that is crumbling. Where do people go now?”

Like elsewhere, there was panic buying in Northern Ireland’s supermarkets last week. Some stores have imposed restrictions on toilet paper, rice, tinned tomatoes and pasta.

Yet, for those on the bread line, such restrictions are redundant: “A major impact is that people are buying in bulk, and you can’t,” said Athi Silevu about living on a low income.

Her family is seeking asylum in Northern Ireland. Like others in her situation, she is not allowed to work and receives a £40 payment from the Home Office, which makes bulk buying impossible.

Her biggest immediate worry, however, is what happens after schools close, because her daughter receives free school meals, along with 97,000 others. Such meals are factored into her weekly budget. “Without it, I don’t know what we would do,” she said.

Kevin McAreavy, principal of Holy Cross Boys Primary School in Ardoyne, which has some of the North’s worst deprivation, is acutely aware of the impact school closures will have – “Whether that’s to do with free school meals or childminding facilities”or the breakfast club run by his school which some children rely upon heavily.