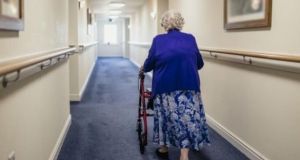 Ultan Meehan died in June two weeks after he was transferred from Kilbrew Nursing Home in Co Meath to a Dublin hospital. Photograph: iStock

Advocates for a widow whose husband died after a nursing home was unable to manage his care have called for clarification on the status of a regulatory inspection of the home.

Ultan Meehan died in June two weeks after he was transferred from Kilbrew Nursing Home in Co Meath to a Dublin hospital with tumorous facial wounds infected and infested with maggots.

His widow Mary Bartley-Meehan has called for an inquiry into his treatment and criticised the failure of various State agencies to carry out an investigation into the circumstances of his care.

She has said she has felt like “a parcel being passed” around by various State bodies.

On his admission to hospital on May 29th, medics found Mr Meehan, who suffered from dementia and terminal cancer, had scratched his facial tumours into an open wound.

Hospital medical records said that Kilbrew Nursing Home was “unable to manage” the wound on his face and it had become infested.

Video evidence was taken by the medics on his admission showing his wound. Mr Meehan died just over two weeks later of sepsis.

Sage Advocacy, a support group for vulnerable adults, has called for clarification after Minister for Health Stephen Donnelly said last week week that the regulator, the Health and Information Quality Authority (Hiqa), “is investigating what happened – they are providing a report”.

Hiqa has carried out an inspection of the nursing home and is preparing a report.

“We are asking the current Minister for Health if he has now asked Hiqa to undertake an investigation under relevant healthcare legislation,” said Sage executive director Mervyn Taylor.

Mr Taylor said Mrs Bartley-Meehan was “absolutely clear” that there has been no direct contact with her by Hiqa, which “would be absolutely essential in the event of a proper investigation”.

He noted that Mr Donnelly told the Oireachtas committee on Covid-19 last week that “in the first instance Hiqa has to investigate”.

“It is imperative that there is clarity in the Department of Health as to whether or not Hiqa is undertaking an investigation as indicated by the Minister to the Oireachtas committee,” he said.

“I have no doubt that it was not the intention of the Minister to mislead an Oireachtas committee or cause further upset to Mrs Bartley-Meehan so for everyone’s sake this issue needs to be clarified immediately.”

A spokesman for Hiqa said that that it was “aware of the sad circumstances” pertaining to the death of Mr Meehan and that “all correspondence received on Mrs Meehan’s behalf has been reviewed and responded to.”

“This is expected to occur in the near future,” said the spokesman.

Kilbrew chief executive James Keeling said last month in response to queries about Mr Meehan’s condition on admission to hospital that the nursing home worked to provide “the best of care” and that, like other homes, it had been “under acute pressure in the midst of the pandemic”.

In a statement the Department of Health said Hiqa had recently inspected the nursing home “which included raising the issue of the care of Mr Meehan with the nursing home directly” and the report was being drafted.