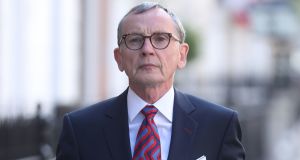 Dr Gabriel Scally found about 250,000 smear tests from women in Ireland were read in labs that had not been approved by CervicalCheck. Photograph: Niall Carson/PA Wire

CervicalCheck has defended the performance of an unapproved Manchester testing lab whose existence it remained unaware of for three years.

The cervical cancer screening programme said the MedLab Pathology facility in Salford performed acceptably for reviewing smear tests. “Since we were made aware, in October 2018, of the existence of the Salford facility, we have reviewed the data from this laboratory separately and, over the last two quarters, have found that it remains within acceptable standards.”

Separately, legislation to set up a tribunal to hear cases from women alleging misreading of their smear tests is to go to Cabinet next week. This follows a decision by the Oireachtas health committee on Wednesday to forgo the requirement for prelegislative scrutiny of the measure.

The existence of the Salford lab was revealed this week in a report by Dr Gabriel Scally, who said the circumstances surrounding the screening of Irish women’s slides in the unit was “particularly surprising and disturbing”.

Responding to Dr Scally’s report, CervicalCheck clinical director Dr Lorraine Doherty acknowledged his concerns about the accreditation process for the Salford lab, but pointed out that the report found there was no reduction in quality of screening from the use of this or other additional labs.

Notwithstanding CervicalCheck’s assurances, the use of the Salford lab to process Irish tests is expected to be scaled down considerably. MedLab, whose main facility is in Sandyford, Dublin, is solely focused at present on clearing its share of a 65,000 backlog of smear tests.

Dr Doherty said CervicalCheck hoped over time to restore women’s confidence in the cervical screening programme. Of 105 actions assigned to the HSE arising from Dr Scally’s recommendations, 42 have been completed, 52 are in progress and seven are due to start later in 2019. Most actions would be completely implemented by the end of 2019.

Speaking in the Dáil, Taoiseach Leo Varadkar said the revelation in Dr Scally’s report about further outsourcing of CervicalCheck tests to other labs was “serious and unacceptable”.

“It shouldn’t have happened and it should have been picked up by CervicalCheck’s own quality assurance management scheme and clearly it was not,” he said.

The Taoiseach said it was reassuring that the labs were accredited and that Dr Scally said there was no reason to believe they were substandard.

In his report, Dr Scally found about 250,000 smear tests from women in Ireland were read in labs in the US and the UK that had not been approved by CervicalCheck.