Millions of Chinese on lockdown in two cities at epicentre of outbreak, which has killed 18 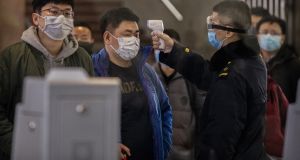 A passenger who arrived on the last bullet train from Wuhan to Beijing is checked for a fever by a health worker on Thursday. Photograph: Kevin Frayer/Getty Images

Irish officials have stepped up precautions to deal with the threat of a new flu-like virus as four suspected cases were being treated in Scotland and one person with symptoms associated with the illness was being treated in Belfast.

Staff in airports and in the health service have been told to be on heightened awareness of people with respiratory symptoms who have returned from Wuhan in China, where the coronavirus first emerged earlier this month, or who have been in close contact with people with the disease.

Arrangements have been made for a special incident response team from the ambulance services to transport suspected cases of infection to hospital, where patients will be placed in isolation. GPs have been told to isolate patients who satisfy these criteria in side-rooms, pending transfer to hospital.

On Thursday a man who had recently arrived from China presented at the Royal Victoria Hospital in Belfast with symptoms which could be linked to the virus. He was isolated as a precaution and is believed to be responding well to treatment. In Scotland, four people are being tested for suspected coronavirus after travelling there from Wuhan.

China put millions of people on lockdown on Thursday in two cities at the epicentre of the outbreak, which has killed 18 people and infected more than 630, as authorities around the world worked to prevent a global pandemic. Wuhan has also pledged to build a new hospital in six days to treat patients.

Under existing protocols in Ireland, pilots are required to inform ground staff when passengers are seriously ill. These arrangements will be used to ensure any passenger showing clinical symptoms and who was in Wuhan, or in close contact with a case, will be treated by emergency services staff on arrival in Ireland. Active screening of flights from China is not being introduced.

However, Health Service Executive officials say the risk of an Irish case of the coronavirus remains low, and they say the health system is ready to handle any infections should they occur.

Ireland has no direct flight connections with Wuhan, they pointed out, and flights between London, Paris and Rome and the Chinese city have been cancelled as authorities there battle the outbreak.