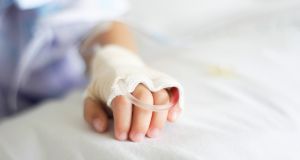 Acute flaccid paralysis – also known as acute flaccid myelitis (AFM) – is a rare illness in which certain muscles in the body become paralysed.

Children affected as part of an acute outbreak of the condition in the US have developed sudden weakness in their arms or legs. Health authorities there first noted a sudden increase in cases in 2014; the number of confirmed AFM cases is now 386. Some 62 cases have been identified in the US so far this year.

AFM is not a new condition. Over the years, possible causes including viruses and environmental toxins have been identified. Even with the recent increase in cases, less than one in a million people develop AFM in the US every year.

While there has been no outbreak of AFM either here or in the UK, experts with the Health Protection Surveillance Centre (HPSC) have asked doctors to be on the lookout for possible cases.

AFM symptoms include: weakness and loss of muscle tone and reflexes in the arms or legs, facial droop or weakness, difficulty moving the eyes, drooping eyelids, difficulty swallowing and slurred speech.

While similar symptoms of muscle paralysis are seen in poliomyelitis, a viral illness, (the last confirmed case of polio in the Republic was in 1984), the US Centers for Disease Control and Prevention (CDC) has confirmed that all AFM cases have tested negative for the polio virus.

Polio is a type of enterovirus and it is possible the outbreak is the result of complications of an, as yet, unidentified enterovirus. Adnenoviruses and West Nile virus are other possible causes of AFM. And while any viral illness can cause meningitis and encephalitis (inflammation of brain tissue), cases are rare.

The CDC has tested a variety of specimens from AFM patients for a wide range of possible causative bugs but, to date, no virus or bacteria has been consistently identified; a pathogen detected in the spinal fluid would be good evidence to indicate the cause of AFM since the condition causes paralysis by affecting the spinal cord.

While there is no current increased risk of AFM here, and no cause for alarm, the reports from the US are a useful reminder to check that your child’s polio vaccination is up to date.