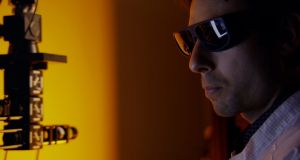 The biophotonics team at Tyndall which is based in UCC, is researching non-invasive techniques using light technology to detect cancer, especially colon cancer.

Scientists based in Cork have developed a more effective and less invasive way to diagnose and treat colorectal cancer, which is the third most common type of cancer in the world and the second most deadly.

They have created a tool for non-invasive surgical guidance and early disease detection using biophotonics technology; a light-based instrument that senses and differentiates tissues including tumours more accurately and faster.

The team’s research has been published in the scientific journal Nature, and proves the use of biophotonics can help to radically improve health outcomes for patients as it is less invasive and provides more comprehensible information to clinicians and surgeons in real time – particularly in the area of colon cancer.

Pre-clinical and clinical studies with patients who have gastrointestinal diseases and oral cancer are due to commence in the MUH and CUH later this year.

Marcelo Saito Nogueira from the biophotonics team said clinical interventions have been significantly improved by recent advances in devices for diagnostics and surgical guidance. Most used imaging technologies provide key indications “only detectable at a late stage in the disease”.

He added: “The tools we are developing will be more beneficial as they identify and locate disease at an earlier stage based on molecular changes, If accurately detected, the disease can be fully treated in less procedures and the risk to the patient and number of cancer surgeries would be reduced.”

The team are using optical spectroscopy and imaging techniques that are promising “molecular-sensitive tools” with potential to monitor diseases and guide surgical procedures by providing a non-invasive, fast and in situ interrogation of biological tissues.

“We have shown that by selecting fine wavelengths of light it is possible to differentiate the molecular structure of cancerous versus non-cancerous cells,” he explained.

These techniques can be cost-effective and integrated into existing clinical tools, which enhances their potential to improve current healthcare and also makes them commercially attractive, said Mr Nogueira. “We also look forward to collaborating in the future with one of the numerous medical device companies located in Ireland. ”

Colon cancer accounts for more than 9 per cent of all cancer deaths worldwide and this is estimated to increase by 71.5 per cent by 2040.

The biophotonics team at Tyndall, which is based in UCC, is researching non-invasive techniques that are more accurate and faster than conventional detection methods. They are now developing a probe for colon cancer detection during colonoscopy, which can investigate additional types of biomolecules located at different tissue depths.

This will help surgeons to take biopsies at the right places – as they have no guidance as to where to request a biopsy – which will obviate the need for multiple biopsies. It could also help identify more subtle abnormalities such as premalignancies invisible through colonoscopes and medical devices.