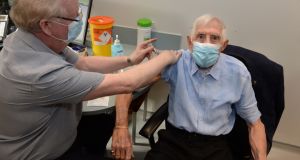 Irish Olympic legend Ronnie Delany says he longs for the embrace of family and friends missed during the pandemic now that he has received his first dose of the Covid-19 vaccine.

The track and field Olympic gold medallist, winner of the 1,500m at the 1956 Melbourne games, said attending a vaccine clinic at his local GP surgery in Cabinteely, Dublin, on Saturday felt like “a reunion”.

“It was a very jolly atmosphere with all the 80-something people there; it was remarkable how many people I knew, including a woman I played tennis with 70 years ago,” said the 85-year-old.

One man in a group awaiting their jab recognised him as “the runner” and asked him about the potential restorative benefits of the vaccine.

“Your man says to me: ‘Could you run the mile at the moment? I says: ‘I don’t think I would be able to walk a mile, never mind run’,” Delany joked.

“I never realised there were so many good-looking men out there in their 80s.”

In the 85s and over age bracket, the south Dublin resident was part of the third cohort to be inoculated in the State’s vaccination prioritisation queue.

Delany knows he has to remain careful until after he receives the second jab, 28 days after the first.

“The vaccine clearly builds up immunity but you don’t go in there today and have an immunity tomorrow, so there is about a month of care,” he said.

For Delany, being inoculated against the virus is “part and parcel of trying to take control and get back to normality”.

“It is very essential in the process of us conquering this Covid,” he said.

He and his wife Joan had been following all the public health advice throughout the first year of the pandemic. He said he had “no issue with cocooning or the lockdowns”.

“Feasting” on golf tournaments on television from Thursdays to Sundays and on his wife’s “wonderful” cooking has sustained him.

The couple’s children helped with deliveries of groceries and repairs around the house, while their grandchildren would visit “at the gate” bringing treats for “Papa” and “Nana”.

He looks forward to hugs, handshakes and greater contact, and maybe a visit to Spain when it is safe and permitted. He sees vaccinations as “key” to relaxing travel restrictions.

“I don’t have a need to say that I am now escaping this cocooning,” he said. “I just look forward to the freedom.”