The level of infections in healthcare is inexcusable, and the population is traumatised the last botched reopening 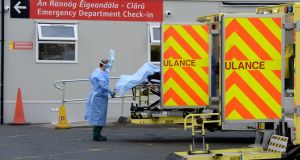 A patient being brought to a Covid emergency department. Levels of infections among healthcare workers are up to six times higher than in the community, with significant levels of undiagnosed infection among asymptomatic staff. Photograph: Alan Betson

The rollercoaster ride continues: from having Europe’s fastest rising surge of Covid-19 cases a few weeks ago Ireland’s incidence is dropping faster than anywhere else on the continent.

From 18 per cent daily growth just a fortnight ago, our case numbers are now falling by up to 8 per cent a day.

Close contacts and the proportion of positive tests in the community have more than halved and the reproduction number is well under 1, meaning the pandemic is ebbing away. Even Prof Philip Nolan, not usually given to extravagant praise, says we have done better than he had expected.

So why does it feel as though there is little cause for celebration? Why is the national mood so dark and pessimistic? Why does no one think lockdown will be lifted at the end of the month?

The answer lies in the psychology of the pandemic as well as the numbers. The latter tells us daily case numbers are about 10 times higher than they were when restrictions were last eased at the start of December. While falling, by the end of the month they will still be three to four times higher.

As Dr Tony Holohan told the National Public Health Emergency Team briefing on Thursday evening, despite making substantial progress “we’re nowhere close to where we need to be”.

Meanwhile, GPs are reporting the decline in patients presenting with suspected Covid-19 has stalled in the past week. There is no certainty of further substantial improvement.

So even though the incidence among young schoolchildren will soon be down to the levels of last October, when schools remained open, there is little talk among a traumatised population of opening them at the end of this month.

Given how badly we eased out of the last lockdown, it is understandable how few people think we’ll be ready to ease restrictions when the current set of measures ends.

On that occasion, six weeks of lockdown failed to get virus levels down to a manageable level, and heightened levels of movement and socialising in the run-up to Christmas quickly pushed us into crisis again.

In December, though, we started with relatively low levels of patients in hospital and ICU, and few deaths. Unlike other European countries, Ireland escaped the worst consequences of illness during the autumn surge.

Not so this time. Fifty deaths of patients with Covid-19 are being reported every day, well above the peak last spring of 32. With 2,000 virus patients in hospital, and 200 in ICU, our hospitals have never before been so dominated by a single disease.

Serious illness and death lags positive cases by two or three weeks. Although cases will have fallen steeply by month’s end, the health service will still be dealing with large numbers of very ill and dying patients.

Because these cases have seeded, nothing can be done to prevent them other than to give patients the best treatment possible. As hundreds die in the coming weeks, it will be difficult to countenance opening up the country again.

But even that might be possible if the way forward were certain. It isn’t.

First, there is memory of the botched reopening in December. Second, the uncertainty about new variants of the disease, the impact of which remains unclear. Because of them, many of our neighbours look set to prolong or toughen up their restrictions.

Europe is spooked by what happened in Ireland over Christmas; how we went from best to worst in the space of a month. At least we’ve had our battle with the variant first identified in the UK, which now accounts for a majority of cases and is likely to become fully dominant within weeks.

It can’t do us much additional harm now, but other countries are anxious to keep it out while they roll out vaccines. Last week, Chancellor Angela Merkel even considered setting up controls at Germany’s border with France due to her concerns over travel from Ireland.

Officials here want to suppress the spread of two other “variants of concern” first identified in South Africa and Brazil while we get on with our own immunisation programme. These variants could impair the effectiveness of Covid-19 vaccines by “evading the immune response”, they acknowledged this week.

Another challenge is to get to grips with the number of outbreaks in healthcare settings, which account for nearly half of all deaths this month. More than 400 patients have picked up the virus in a healthcare setting in the past fortnight alone.

This level of infection was appalling in the first wave; it’s inexcusable now. It will become even more inexcusable soon, after healthcare workers rightly enjoy the protection afforded by vaccination while patients remain exposed. Simply blaming hospital outbreaks on infections in the community is not enough.

A study this week showed levels of infections among healthcare workers up to six times higher than in the community, with significant levels of undiagnosed infection among asymptomatic staff. A national outbreak control team has been set up but solutions such as better ventilation and antigen testing have been slow in coming.

The third uncertainty about the future relates to what might happen after lockdown is lifted. Having failed twice to control the virus after previous lockdowns, confidence is low about keeping it under control afterwards, especially given the threat posed by the new variants.

Prof Nolan estimates the UK variant adds about 0.15 to the reproduction number. Effectively this means we have to work harder in terms of public health measures and societal restrictions to achieve the same result as before.

Some 55 per cent of people support further restrictions but in truth the options are limited. The focus in coming weeks is likely to be on travel and on non-compliance, given how much most of us are sacrificing at present, along with speedy vaccine rollout.