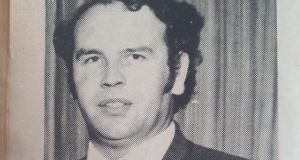 Danny Delaney, Theresa Sherlock and Ger O’Neill. Those are the names of some of the men and women who lost their lives at a hospital in Laois over the Easter weekend.

They are the faces behind the statistics illustrating the deaths of nine people over three days at the Maryborough Centre, St Fintan’s Hospital in Portlaoise – eight of whom were confirmed as having Covid-19.

In the case of Danny Delaney, who comes from Stradbally which is home to Electric Picnic, he had only been resident in St Fintan’s Hospital for about three weeks.

He had spent months in the Midlands Regional Hospital in Portlaoise, before making the half-mile journey down the Dublin Road to the Maryborough Centre for Psychiatry of Old Age.

Known locally as St Fintan’s, it is a recently refurbished unit with multiple occupancy rooms and is registered with the Mental Health Commission for 28 beds.

Once a distinguished footballer, Mr Delaney represented his club and county in the 1950s, 1960s and 1970s. He was on the Stradbally team which won the Laois intermediate championship in 1959 and again in 1963.

He represented Laois at county level throughout the 1960s while he also hurled at senior level for Ratheniska during this time. Later, he served as a GAA official, serving as vice-chairman of the Laois County Board in 1973.

He is survived by his wife Doreen, brothers John, Teddy and Kyrle, brothers-in-law, sisters-in-law, nephews, nieces, neighbours, relatives and friends. He was laid to rest at a private ceremony in Oughaval Cemetery on Tuesday.

Doreen said she could find nothing negative to say about the staff or their care of her husband.

“I wasn’t allowed anywhere near him, it was total lockdown. And that was very, very sad, the hardest part of it,” she said of when her husband contracted the virus.

“But what they did, they did absolutely everything - held the phone, held a microphone to him and let me speak to him on the phone,” she told RTÉ’s Prime Time.

However, the length of time Mr Delaney stayed in St Fintan’s was the exception, not the rule. Most of the 26 residents have been there for years, some for decades.

The psychiatric ward of the hospital was actually moved to the Midlands Regional Hospital in 2004 and now St Fintan’s, chiefly the Maryborough Centre, cares for elderly patients.

One member of staff, who spoke to The Irish Times but wished to remain anonymous, said they feared for the safety of the remaining 17 patients. “To see so many patients die one after another is deeply distressing and upsetting.

“To see them being put into black bags and taken away is heartbreaking. We have developed close relationships with the people here as we see them and interact with them everyday,” the distressed staff member said.

Local Sinn Féin TD Brian Stanley shares the concerns felt by many in Portlaoise for the health of those still staying in St Fintan’s, pointing out that many of them have already tested positive for Covid-19.

Demanding that the HSE does more to protect patients and staff, he says: “The deaths of over one-third of the patients last weekend have shocked people. It is also very traumatic for the staff and the families of the deceased.”

St Fintan’s has struggled, he said, because so many staff are out sick, or self-isolating, though he accepted that “a real shortage of personal protective equipment [PPE]” which had existed “is now being addressed”.

While PPE is vital, its use poses problems for staff in the centre who are dealing with people they have known, often for year: “With their conditions, seeing us dressed up in PPE is very hard on them,” said the staff member

“A number of those remaining have tested Covid-19 positive but we are treating all patients as if they have the virus and they are being isolated. Our biggest fear now is that many of the patients who are still here will also die.”

Concerns had grown in and around Portlaoise over the last fortnight that not all was well in St Fintan’s, as rumours – later confirmed – spread about the shortage of PPE and the number of staff forced out of work through illness.

The local community have tried to help and three soccer clubs, Portlaoise AFC, Stradbally Town and Towerhill Rovers, ran a fundraiser which saw hot food and supplies delivered to the door.

Consultants at the Midlands Regional Hospital in Portlaoise have now taken over the care of the remaining 17 patients and are providing medical support and assistance, says the HSE.

“Support was also provided by experts [in infection control]. Occupational supports and debriefing are being offered to staff at the centre following these tragic deaths,” it added.

Some residents may need to be moved after Covid-19 outbreaks, though the Health Information and Quality Authority “feels quite strongly” that people should not be moved out of a place that has become their home, she said.

The decision to leave the remaining patients in St Fintan’s was defended last night by Dr Colm Henry, the HSE’s national clinical adviser and programme lead for acute hospitals.

Transfers to acute hospitals are happening when it is in the best interests of the patient, and he rejected suggestions that some elderly people are being denied intensive care treatment.

“The best clinical judgment is made in each case. For many people in nursing homes, their co-morbidities, such as advanced dementia, or chronic illness, means that it is not the appropriate decision to transfer them.

“They got a type of treatment and assessment which is better than acute hospital care because the consultants from the hospital up the road came down and went through each case over the bank holiday weekend,” said Dr Henry.

Meanwhile, the Mental Health Commission has become involved too and is examining the situation surrounding PPE supplies that now faces St Fintan’s , along with finding extra staff.

Expressing his sympathy to the families of those who have died, Minister for Justice and local TD Charlie Flanagan said: “This is a tragedy in our community.

“I would like to offer my sincere sympathies with the families of the deceased, some of whom I know personally, and with the hardworking and dedicated team at the unit.

“This was a heart-breaking experience for everybody concerned,” he said, adding, “My concern was and remains that everything that could be done was and is being done for staff and residents.”

Catholic Bishop of Kildare and Leighlin Denis Nulty said the deaths bring home in “a very dramatic way the huge need for special care” for those living in nursing homes and residential centres.

“Every life matters. Every life counts. Every life is precious irrespective of age or potential productivity. In the nightly news reports, we hear many statistics that may confuse us.

“I am conscious that we might lose the person that is behind every statistic – this is someone’s mother, father, grandmother, grandfather, brother, sister, son, daughter or friend.”

Quoting a line from a British woman who lost her sister to the virus, Bishop Nulty said no one is a statistic: “Neither is she or anyone who dies because of Covid-19 or who has tested positive.”

Confirming that eight of St Fintan’s residents had died after they had tested positive for Covid-19, the HSE insisted it had enough staff to manage the centre despite “a number of staff [who] are currently on sick leave”.

Extra staff were deployed there more than a week before the Easter weekend following the diagnosis of Covid-19 in the resident group and to support their greater care needs, it said.