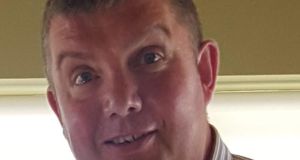 Jim Kenny: ‘He was a community hero involved in everything. It is just tragic for him and the family.’

People gathered on the streets in Kilkenny’s oldest neighbourhoods on Thursday to pay a silent tribute as a hearse carrying the remains of Catherine Hickey passed by.

Ms Hickey (née Whelan), in her 50s and married with two children, was one of two members of staff at St Luke’s General Hospital in the city to die after they were infected with coronovirus. She will be laid to rest on Friday in St Kieran’s Cemetery after a private family funeral.

A memorial Mass to celebrate the life of her colleague, Jim Kenny from Ballyragget, Co Kilkenny, who was a care worker at the hospital, will take place at a further date.

He was not in hospital when he died. Friends say he had been self-isolating at his home outside the Co Kilkenny village. On Monday he had felt well enough to mow the lawn. However, he became unwell and was found dead later by gardaí.

“Just one of those guys there ready to give a helping hand. He would volunteer for everything – there was no job too little or large.”

Fine Gael TD John Paul Phelan said the staff at the hospital had been “rocked to the core by this devastating news”, which is “so hard to comprehend”.

“Our healthcare workers go above and beyond every single day to care for those impacted by Covid-19,” he said, and death amongst those who risk “life and limb day after day to help others is particularly hard to comprehend”.

The workers were members of Siptu and are deeply mourned by their colleagues and friends, the union’s health division organiser Paul Bell said.

“We offer our sincere condolences to the families and friends of our two deceased members. The colleagues of these two workers as well as the members and staff of the union’s health division are deeply shocked by their deaths.”