'Any attempt' to change maternity hospital deal will scupper it

Father Ted co-creator Graham Linehan called on the government to remove the Sisters of Charity involvement with the new maternity hospital. He was speaking at a demonstration on Merrion square in Dublin. 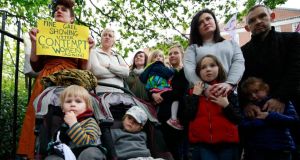 National Maternity Hospital controversy: Parents for Choice protest against the decision to give the new hospital to the Sisters of Charity. Photograph: Nick Bradshaw

The National Maternity Hospital’s planned move to the campus of St Vincent’s University Hospital will be scuppered by any effort to alter the agreement, the man who negotiated the deal has warned.

Kieran Mulvey, the former chairman of the Workplace Relations Commission, acted as a mediator between the hospitals, whose deal with the Department of Health will lead to the new maternity hospital being owned by the Sisters of Charity.

Dr Rhona Mahony, the hospital master, has said the existing facility is no longer fit for purpose.

The decision to give sole ownership of the €300 million State-funded hospital to the Sisters of Charity provoked controversy, mainly because the Comptroller and Auditor General had said the congregation had not yet met its financial commitment to a redress scheme for victims of institutional child abuse.

But the Department of Education yesterday said reports that the religious order had, by waiving legal costs, fully paid its agreed contribution are “essentially the case”.

After the Commission to Inquire into Child Abuse published its final report, in 2009, the Sisters of Charity offered an extra €5 million in cash, of which the order has so far paid €2 million. The department said the congregation subsequently decided to waive its claim for legal costs from the commission, which was chaired by Mr Justice Seán Ryan, and to offset this claim against the outstanding cash.

When St Vincent’s Healthcare Group, which owns St Vincent’s University Hospital and its neighbouring private hospital, agreed to accept the move from Holles Street it sought to integrate the new hospital into its structures, but it compromised to accept a separate legal entity and to preserve the mastership system that sees the National Maternity Hospital led by a doctor.

Mr Mulvey said that although elements of the agreement will be “clarified”, the deal “will stand”. He said legal arrangements will be put in place in the coming months. Government sources also said clarity could be provided when the agreement is given legal basis.

Three former masters of the National Maternity Hospital opposed the move to the St Vincent’s campus at a board meeting held to decide on the proposed deal.

It has also emerged that new facilities are to be provided at St Vincent’s, including a pharmacy and laboratory space, as part of the agreement. This has contributed to a rise in building costs from an initial indicative sum of €150 million to €300 million today, although this is expected to rise further.

Other factors are the siting of the project on the St Vincent’s campus, at Elm Park in south Dublin, rather than on a greenfield location, and the 18-month hiatus caused by the row between the two hospitals during a time of increasing construction inflation.

Minister for Health Simon Harris has responded to criticism of the plan for the Sisters of Charity to own the site of the maternity hospital by saying he will insist on further safeguards to protect against religious interference before the project goes ahead.

One of the former masters was the only director to vote against the proposal brokered; Dr Boylan and another former master abstained.

A majority of members of the board, known as the executive committee, was swayed by the argument made by the current master, Dr Mahony, that the deal provides enough guarantees for the clinical, financial and operational independence of the maternity hospital and by the urgent need for the hospital to move from its outdated premises on Holles Street.

She was supported by the hospital’s deputy chairman, Mr Justice Nicholas Kearns, who was centrally involved in the negotiations with St Vincent’s and has said that he regards the agreement as legally watertight in protecting the interests of the maternity hospital.

The Sisters of Charity could not be contacted last week for official comment. Callers to the order’s offices in Dublin were told that they were closed for Easter and that the superior general, Sr Mary Christian, was away.