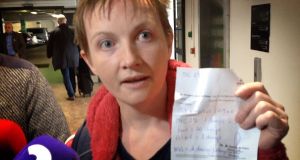 Cork woman Vera Twomey at Dublin airport holding up a prescription for cannabis which she received in Barcelona. Screengrab: The Irish Times

Customs officers have seized medicinal cannabis at Dublin airport, brought into Ireland by a woman looking for access to the drug for her young daughter.

Cork woman Vera Twomey, who wants access to cannabis for her daughter Ava, was stopped on Friday with the THC cannabis medication she had purchased in Barcelona.

Ms Twomey was with Luke “Ming” Flanagan MEP and Gino Kenny TD, when she was stopped at the airport.

Customs officers seized the prescription medication after questioning Ms Twomey for just under an hour.

Speaking afterwards, Ms Twomey said it was a “complete injustice” that the cannabis-based medication, THC, was taken by Irish customs.

“This medication is available all over Europe. I am not doing anything wrong. It shouldn’t be illegal in this country. It is allowed in 11 different countries in Europe, in the US, in Canada, in Australia – they’re not wrong.”

Ms Twomey and People Before Profit TD Mr Kenny flew to Barcelona, where they saw a consultant and legally purchased the prescription medication.

The drug, which is illegal in Ireland, is available under a special compassionate access programme, if prescribed by a consultant.

No consultant in Ireland will currently prescribe the medication to Irish patients, which Ms Twomey says can help ease Ava’s epileptic seizures.

After landing in Dublin at noon on Friday, Ms Twomey, Mr Flanagan and Mr Kenny were brought from the aircraft and questioned by Customs officers.

The PBP TD said they were each questioned in separate rooms by three or four Customs officials. “There were [sniffer] dogs waiting for us coming off the plane,” Mr Kenny said. “Many people are suffering in this country that are being criminalised for using medicinal cannabis, and that is immoral to my mind.”

“This woman should have been allowed the medicine and should have it here in her pocket and be going back to Cork and treating her daughter,” the People Before Profit TD said.

Ms Twomey said she was aware she could have been arrested for carrying the illegal substance into Ireland.

“It did cross my mind, I’m not afraid. I’m more afraid of my daughter dying in the morning from seizures, that if she got 30 or 40 seizures tomorrow that could kill her.

“This is what could save my daughter’s life, and that’s why I went. What needs to happen now is that the legislation needs to be brought in so that people like us can get the treatment for our families.

“I’d like Minister Simon Harris to do something rather than me having to travel to Barcelona – why should I have to do that? This is my country, this is my child in this country, she deserves medication in this country.

“They’re basically analysing the product to see what percentage THC is in it, then they are most likely to come back, who knows, time will tell. The process is they have to establish whether it’s illegal or not, and if they establish that it is illegal, then it’s their call where they go from there.”