Why is the sea blue, and why can’t dogs see all the colours that we can?

Michael Viney: You might wonder if any living thing sees Earth’s ‘true’ colours at all 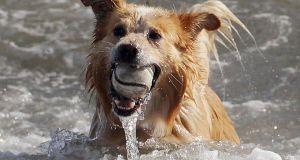 Dogs miss much of the colour we can see. Photograph: Niall Carson/PA

“Green, how I love you green . . .” Lorca’s first line sounds even better in what’s left of my schoolboy Spanish (“Verde, que te quiero, verde”). It leads his romantic poem into surreal directions – green wind, green hair – but his words ring out at this time, when green fills so much of my hillside world.

Not 40 shades of it but hundreds, of every hue and gradation, one plant to another, one tree to the next, one leaf to the next, from vivid light to deep shadow. Some greens are quite thrilling, if that’s allowed, especially the new, golden-green shoots that May fills with sunlight.

What’s green to people is chlorophyll, molecules that help a plant to use sunlight to make sugars for energy out of water and carbon dioxide. But green is also a colour we make in our minds, when information from our eyes is processed in a corner of our brains.

A long sojourn with Google has left me wondering if any living thing sees Earth’s “true” colours at all.

The Natural History Museum in London staged a big exhibition, Colour and Vision, on this last year. Some of it can still be enjoyed on its website, at nhm.ac.uk. It offers ways of comparing our vision with how other creatures see nature.

The vivid, Technicolor sight of humans depends on millions of cells in the retina, which lines the back of the eye. Along with rod cells around the edges that help us see in poor light, they include three kinds of colour-sensitive cones that absorb particular wavelengths of light – red, green and blue.

Our brain blends them into almost any colour. (We seem to “see” yellow just by subtracting the blue.)

Some wavelengths in the spectrum of light are absorbed by leaves, flowers and feathers, or whatever, and others are reflected and picked up by our eyes. The chlorophyll of leaves reflects the green wavelengths.

When they die back in autumn, other pigment molecules show up: carotenenoids, reflecting yellowy-orange, and anthocyanins, reflecting reds and purples: hence the richer tapestry of the fall.

A dog has only two sets of cones, specialised for picking up yellow and blue-to-ultraviolet light, and misses much of the colour we can see. As for snails, right at the heart of greenness, their eyes can’t focus or see colour: their world is a monochrome blur.

Many other creatures, however, see colours when we can’t – at night, for example, or at the ultraviolet wavelengths of light. In the 1970s it was shown that hovering kestrels can spot their tiny rodent pray by ultraviolet reflected from their trails of urine.

Ultraviolet (UV) vision had long been known from the insect world, guiding bees to particular flowers, butterflies and moths to wing patterns on their mates, and spiders to their prey. Some insect vision can be almost as complex as that of humans.

Many, if not most, birds have UV vision that leads them to berries or choice of a mate. Among blue tits, for example, the crest feathers of males reflect UV in the spring, and females will pick the brightest. Adding UV perception to red, green and blue, birds may distinguish even more colours than we do.

Some of their own colours are the most brilliant in nature, like those of the most gorgeous flowers. Both are usually aimed at reproduction – the birds by attracting mates, the flowers by attracting pollinating insects (or birds).

Colour in the ocean, too, has everything to do with light. “Why is the sea blue?” must be one of the most googled questions, and the answer – that short-wavelength blues and violets are the colours the ocean reflects – introduces many people to the physics of perception.

Beneath the sea’s surface, sunlight or its slow thinning to the dark is just as vital to visible colour, depending on whose vision it is. Fish also have cone cells for colour and UV vision, and bigger eyes, to gather more light, the deeper and darker they live.

Subsea, the magazine of Ireland’s scuba divers, often enchants me with its photographs of underwater life. But along with the shots of corals, sponges and psychedelic fish from the clearest and brightest of tropical waters come those, nearer home, whose deeper beauty must depend on artificial light, to feed the digits of human vision.

When ocean trawlers began hauling up the schools of orange roughy from the shadows of the seamounts, the brilliance of their colour surprised me. But that was to ignore what happens to colour at the deepest reach of light.

Blue light strikes furthest, and at 100m down red light starts to disappear: it has the longest wavelength and the least energy in the spectrum. So a red or orange fish, absorbing all other wavelengths of colour, fades into a shadowy obscurity.