Which spider made this web? Readers’ nature queries

Eye on Nature: Ethna Viney replies to your question and observations 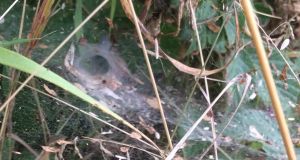 Eyes on nature: the web, probably of a labyrinth spider, that Katherine Barry Murphy saw on the banks of the Suir

On the Isle of Wight I saw a stoat making at least five visits to an area covered by low vegetation to retrieve one small animal each time. A rat challenged her, and I wondered if the stoat was abducting young rats or moving her own young.

The stoat was moving her brood to a safer place, probably because the rat was lurking.

I saw the spider’s web in my photograph in undergrowth on the banks of the Suir. It was funnel shaped, opening out into a quite large web, and there was a medium-sized, brownish mottled spider inside.

It sounds like the labyrinth spider, ‘Agelena labyrinthica’, which is not generally found in this country, and mainly near ports. It has been reported in Carnsore and Cork Harbour areas.

There were hundreds of small, brown, stinging jellyfish when I was on holidays in Co Clare. They were about three inches long and one inch wide, with long, trailing tentacles. Were they juvenile lion’s mane?

No, but from your photograph they look like a fresh hatch of ‘Pelagia noctiluca’ (also called mauve stingers, which can also be brown) in the final stage before maturity, when they reach four inches across.

I took this photograph of a caterpillar in Co Kerry. What is it?

It is the juvenile caterpillar of the puss moth. Later it will turn green, but the saddle will remain dark.